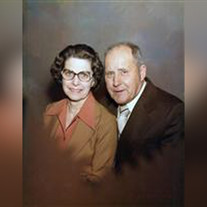 Alice Johnson Andersen, age 95, passed away peacefully at her residence Sunday, February 27, 2011. Alice Johnson Andersen was born to Charles and Emma Johnson in Mead, Nebraska, on October 15, 1915. She lived in Saunders County and O’Neill, Nebraska, and in Dodge County. She graduated from Hooper High School and from Grand Island School of Business. Alice married Rex Andersen on April 6, 1937, at her home in Maple Township. Their first home was in Dodge County where son Dewaine was born. Then they moved off of the farm and into Fremont followed by a move to California for 5 years where daughter Kay was born. Alice, Rex, and the two children moved to Spalding, Nebraska, where they owned and operated the local Sale Barn. It was here where they became life partners not only in marriage but also in business. They were active in local community affairs, church activities, and they especially enjoyed playing pinochle with friends, neighbors, and relatives. In 1957 they moved to Holdrege where they lived and opened their own Real Estate Brokerage, Andersen Real Estate and Auction, for 30 years, until they retired. Here they welcomed their five grandchildren. During these years they also met and welcomed many new friends and traveled extensively both on tours and in their travel home. They returned to Fremont in 1986 where Rex passed away in 1991. Alice continued her active participation in church activities, card clubs, and luncheon groups. She enjoyed plants and flowers and passionately nurtured her beloved 50+ year old peony plants. Alice loved, appreciated, and enjoyed watching each of her seven great-grandchildren as they grew from infants to adolescents to young adults. She particularly liked to host family gatherings and was happy to have everyone together for birthdays and holidays. She is survived by: Children: Son Dewaine (Karen) Andersen of Kerrville, Texas Daughter Kay Baker Grandchildren: Cindy Peterson of Atlanta, Nebraska Kara Peterson of New York, New York Thad Peterson of Atlanta, Nebraska Linda (Allan) Mangold of Fallbrook, California Jule (Ronnie) Meaux of Houston, Texas Great-Grandchildren: Olivia and Katrina Peterson Sell, Skylar Peterson, Jeffrey and Jenna Mangold, Christopher and Stephanie Humburg-Meaux Sister Delores Allan of Lincoln, Nebraska Preceded in death by her husband Rex. Her parents. Two brothers Lyle, Leslie Memorials may be made to the First United Methodist Church in Fremont. The visitation will take place prior to the service Funeral Services will be held at 1:30 PM Wednesday, March 2, 2011, at First United Methodist Church in Fremont. Pastor Michael McGregor is officiating.

The family of Alice E. Andersen created this Life Tributes page to make it easy to share your memories.

Alice Johnson Andersen, age 95, passed away peacefully at her...

Send flowers to the Andersen family.