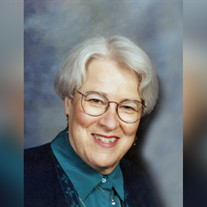 Alice Wayne Johnson, age 79, of Fremont, passed away on Sunday, July 24, 2016, following an informal concert in her honor by friends, colleagues and former students at Nye Legacy. Alice, a warm and kind woman who cherished, faith, family, music and community throughout her life, was born on March 25th, 1938 in Fort Worth Texas. She grew up in Texas until, inspired by her mother and hero, Alice W. Woodard, she moved to Lindsborg Kansas where she attended and graduated from Bethany College with a degree in Music Education. At Bethany she also met the love of her life and husband of fifty-five years, J Ronald Johnson, with whom she raised two sons Paul and Andrew. Alice then embarked on a career in music education over the span of thirty-eight years in Kansas and Nebraska. Alice began teaching in the Fremont Public Schools as a general music teacher in 1973, and shortly thereafter founded the Fremont Orchestra Program. Throughout her career Alice inspired and was loved by hundreds of music students. After retiring from the Fremont Public Schools in 1998, she served as a Master teacher at the University of Nebraska String Project to prepare the next generation of music teachers. Alice received many awards for excellence and dedication to teaching over her career including being elected to the Nebraska Music Educators Hall of Fame in 2003. In addition to teaching, Alice was an accomplished musician on the violin and viola, playing with the Duluth Symphony Orchestra, Heartland Philharmonic and Orchestra Omaha. She provided music for numerous events and celebrations solo or as a part of a music ensemble. She is survived in death by her husband J Ronald Johnson, son Paul Johnson and his wife Beth and son Andrew Johnson and his wife Anna and her beloved grandchildren Wes Johnson and Lyla Johnson, her sister Marsha (Ron) Rolander, her brothers Joel (Freda) Woodard and Nate (Cynthia) Woodard as well as hundreds and hundreds of music students, colleagues and friends. Memorial donations can be given to the Sinai Church Organ Fund, Omaha Area Youth Orchestra, or the Omaha Conservatory of Music Sprouts Program. Dugan Funeral Chapel is in charge of the arrangements. Family will visit with friends from 5:00 – 7:00 PM at Sinai Lutheran Church in Fremont. A Celebration of Music and Prayer will be held at Sinai Lutheran Church on Saturday, July 30, 2016, at 10:30 AM with refreshments and fellowship directly after. Pastor Al Duminy will be officiating.

The family of Alice W Johnson created this Life Tributes page to make it easy to share your memories.

Alice Wayne Johnson, age 79, of Fremont, passed away on Sunday,...

Send flowers to the Johnson family.