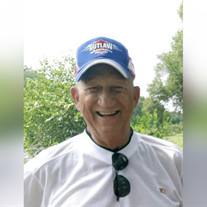 Anthony R. Testa, age 69, of Fremont, passed away Wednesday, February 20, 2019, at CHI Bergan Mercy Hospital in Omaha. Anthony was born on September 1, 1949, in Wahoo, Nebraska to Joseph and Betty (Boyd) Testa. He married his first wife, Eddie Makovica in 1970, they had two children together, Toni Lynn and Tyson, they were later divorced. Anthony moved to Lincoln in 1975, and later moved to Fremont in 1979 and resided there until his death. He then met and married Dani Testa (Snyder) in Fremont in 1989, they had one child together, Taylor. Through the years Tony worked for Coca Cola, Kitty Clover, MTR Trucking, Purina Feed Mill and his favorite of all was helping Amy and Brad Williams with harvesting and trucking. Tony enjoyed boating, bowling, hunting and his love of Nebraska football. He loved spending time with his family, especially his grandchildren. Anthony was preceded in death by his parents; sister, Barbara Jonas; and niece, Lynn Anderson. He is survived by his significant other of 33 years Danielle Testa of Fremont; two sisters; Georgia Matter and significant other Elmer Ruppert of Fremont, and Betty (Jim) Steinmetz of Gilbert, Arizona; Two Daughters Toni Lynn Testa and significant other Jeff Cady of Lincoln, and Taylor Testa of Fremont; Son Tyson (Tiffany) Testa of Lincoln; Step-children Ashley (Mark) Davis of Columbus; Nick Marxsen of Alamogordo, New Mexico, and Bob (Sara) Marxsen of Omaha; 5 grandchildren and one expected in summer of 2019; many nieces and nephews, all loved. Memorials may be given to the family to be designated at a later date. A private Celebration of Life will take place at a later date.

The family of Anthony Richard Testa created this Life Tributes page to make it easy to share your memories.

Send flowers to the Testa family.