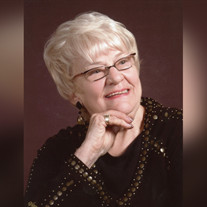 Ardith E. Macaluso, age 86, of Fremont, passed away Saturday, May 5, 2018, at Providence Place. Ardith was born November 25, 1931 to Darwin and Frieda Goldsmith in Goehner, Nebraska. She attended and graduated from Lincoln High in 1949. Following high school she attended University of Nebraska at Lincoln. She married Dr. Richard C. Macaluso on October 13, 1951, in Chicago, IL. They then moved to Lincoln where Richard started his Optometry practice. Richard's practice then brought them to Fremont in 1954. Ardy worked for Richard's practice for a few years, before becoming a stay at home mom, to raise her two sons Gregg and Scott. After Richard sold his practice they moved to Sun Lakes, Arizona where they enjoyed playing golf, traveling, and spending time with friends. Ardy was very involved in her childrens’ school activities. She served as a board member for Archbishop Bergan Schools and spent a lot of her time volunteering at Bergan. She also served as the President of the Ladies Auxiliary of the Nebraska Optometric Association. Ardy enjoyed watching baseball, especially the Chicago Cubs. Above all, Ardy loved the time spent with her children and grandchildren. She is preceded in death by her husband Richard, mother Frieda and brother Dwayne Goldsmith. She is survived by her sons, Gregg (D'Nelle) Macaluso of Castle Rock, Colorado, Scott (Debra) Macaluso of Fremont, grandsons, Trevor, Ben, Connor, Adam and Cole Macaluso, nephews Gil (LuAnn) Goldsmith, Tom (Laurie) Goldsmith. Memorials may be directed to the Medical Center at The University of California Irvine for Alzheimer's Disease Research. www.mind.uci.edu. Visitation will be held Tuesday, May 8, 2018 at Dugan Funeral Chapel from 5-8PM. Funeral service will be Wednesday, May 9, 2018 at Dugan Funeral Chapel at 11AM with Chaplin Scott Jensen officiating. Private inurnment will take place at Valley of the Sun Cemetery in Chandler, Arizona.

Ardith E. Macaluso, age 86, of Fremont, passed away Saturday, May 5, 2018, at Providence Place. Ardith was born November 25, 1931 to Darwin and Frieda Goldsmith in Goehner, Nebraska. She attended and graduated from Lincoln High in 1949.... View Obituary & Service Information

The family of Ardith E. Macaluso created this Life Tributes page to make it easy to share your memories.

Send flowers to the Macaluso family.