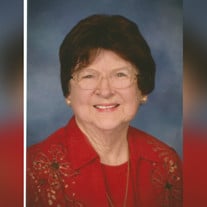 Arlene A. Mulder, age 86, of Fremont, passed away Friday, May 25, 2018, at her home. Arlene was born April 30, 1932, to William and Alma Wagner in Phillipsburg, Kansas. Arlene attended and graduated from Phillipsburg high school. Following high school she married James A. Mulder on August 1, 1954, in Stuttgart, Kansas. To this union were four children. Arlene was a devoted wife, mother and book keeper, always keeping the house and children in order. She was very involved in the family business as well as an active member of First Lutheran Church. Arlene and James were married for 56 years before he passed away in 2011. Above all things, Arlene's family and faith were most important in her life. She will be deeply missed. Arlene is preceded in death by her husband James, parents and brother Milton Wagner. She is survived by her children Lonnie (Linda) Mulder of Lincoln, Larry (Jamie) Mulder of Omaha, Brenda (Dean) Snyder of Omaha, Becky Mulder of Phoenix, AZ, sister Norma Jane (Max) Schick of Phillipsburg, KS, brother Ivan (Phyllis) Wagner of Phillipsburg, KS, grandchildren Elizabeth, Anna, Matthew, Sophia Mulder, Brandon Sova, Lindsey and Ashley Snyder, as well as many other family and friends. Condolences may be left at www.duganchapel.com Memorials may be directed to First Lutheran Church. Visitation will be held Wednesday, May 30, 2018 from 5-7PM at Dugan Funeral Chapel. Funeral service will be held Thursday, May 31, 2018 at 10:30AM at First Lutheran Church. Burial will be held at Memorial Cemetery.

Arlene A. Mulder, age 86, of Fremont, passed away Friday, May 25, 2018, at her home. Arlene was born April 30, 1932, to William and Alma Wagner in Phillipsburg, Kansas. Arlene attended and graduated from Phillipsburg high school. Following... View Obituary & Service Information

The family of Arlene A. Mulder created this Life Tributes page to make it easy to share your memories.

Send flowers to the Mulder family.