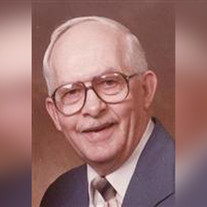 Arnold E. Campbell, 94, of Fremont died Saturday, March 6, 2010, at a Hospice Care Center in Peoria, Ariz.   Arnold was born to George and Stella (Dutton) Campbell on June 27, 1915 in Taylor, Nebraska and graduated from Taylor Public Schools.   He married Carol (Cole) Campbell on January 8, 1938.  She preceded him in death on September 20, 2009.  They lived for a short time in Wyoming and then returned to their farm in Taylor.  Later they moved to Fremont where he was employed for many years with Hormel.  After retirement, they moved to Mesa, Arizona where they lived until August 2005 when they returned to Fremont to be with family.    He is preceded in death by his wife, Carol; an infant son, Gary Edward; son-in-law, Eugene Depue; a granddaughter Kellie Jo Depue Steffans; two brothers, Clyde and Archie; and a sister, Ada.   He is survived by two daughters, Phyllis Depue, of Fremont; Connie (Terry) Layman, of Phoenix, Arizona; four sons, Dean (Sandi) Campbell of Arizona; Bruce (Jennifer) Campbell, of Maine; Dennis (Nelda) Campbell, and David (Deb) Campbell, both of Fremont; a sister, Luella (Jay) Lees of Grand Island; 24 grandchildren, 50 great-grandchildren and 15 great-great-grandchildren.   The memorial service will be held at Dugan Funeral Chapel on Saturday, March 13 at 10:00.  A gathering with the family present will be held Friday, March 12 from 5-8 at Dugan Funeral Chapel.  Memorials may be directed to the family.

The family of Arnold Campbell created this Life Tributes page to make it easy to share your memories.

Send flowers to the Campbell family.