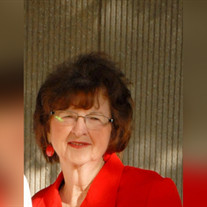 Barbara G. Gaskin, age 83, of Fremont, passed away Thursday, October 13, 2016 at Immanuel Fontenelle Home in Omaha, surrounded by her family. Barb was born October 23, 1932 to Claude and Ina (Windham) Baker in Laurel, Mississippi. She married the love of her life and childhood sweetheart Lavon Gaskin on July 4, 1949. After they married, they traveled the world while Lavon served in the Air Force. They traveled to several different places, making memories along the way. They moved to Fremont in 1967, making it their permanent home. Barb enjoyed sewing, cooking, cake decorating, arranging flowers and other crafts. She was a fantastic cook and often made the majority of the food for the church potlucks. She loved her church and singing in the choir. She was a member of the Fremont Christian Women's Club, and the Emmanuel Baptist Church. Barb loved spending time with her family and helping to raise her grandchildren. She was always there at the "drop of a hat" to help her family when they needed her. She will be missed by all! She is preceded in death by her husband Lavon of 63 years, son Robert Daniel, parents and sibilings. She is survived by her sons, Ken (Barbie) Gaskin of Fremont, John (Rhonda) Gaskin of Lawrence, Kansas, Tim (Tammy) Gaskin of Fremont, daughters Deb (Tom) Miller of Omaha, Pam (John) Stout of Fremont, sister Carolyn Rogers of Laurel, Mississippi, brothers Sonny Baker of Laurel, Mississippi, Sherrill (Charlotte) Baker of Laurel, Mississippi, Louis (Gail) Baker of Ellisville, Mississippi, 16 grandchildren, 14 great-grandchildren as well as nieces, nephews, family and friends. Visitation will be held Monday, October 17, 2016 at Dugan Funeral Chapel from 4-8PM with family present from 6-8PM. Funeral Service will be held Tuesday, October 18, 2016 at 10AM at Dugan Funeral Chapel with Pastor Roger Criser officiating. Burial will be held at Memorial Cemetery.

The family of Barbara G Gaskin created this Life Tributes page to make it easy to share your memories.

Send flowers to the Gaskin family.