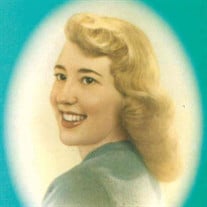 Barbara H. Munday, age 87, of Fremont, passed away Wednesday, June 2, 2021, at Shalimar Gardens in Fremont. Barbara was born December 5, 1933, in Clarksburg, West Virginia, to Hale and Gladys (Selvey) Wilson. As a child she moved to Omaha with her parents, attended and graduated from Central High School in 1951. She attended the University of Nebraska at Lincoln and graduated in 1955, with a degree in Elementary Education. Barbara was active in Alpa Phi and served as Sorority President. In 1957, she married Don Anderson and to this union were born three children, Brett, Kyle, and Christy. In 1976, Barbara moved to Clarksburg, West Virginia where she taught Kindergarten at St. Mary's Catholic School. Barbara married Lew Munday in 1982, and relocated to Fremont. When Lew retired from Taylor and Martin Auctioneers, Barbara and Lew moved to their lake home in Clarks, Nebraska, where they enjoyed family gatherings and gardening for the next 10 years. In 2000, they moved back to Fremont to be closer to family and friends. Barbara was a passionate cook, who lived by the old adage "to much of a good thing, is wonderful"...along with a good dry martini. She was never without a good book, or the daily crossword puzzle, but the love of her life was her family, grandchildren and close friends. Barbara was a member of St. James Episcopal Church in Fremont and St. Augustine of Canterbury in Elkhorn. She is preceded in death by her husband Lew, parents Hale Wilson and Gladys & Frederick Beck and step son Michael Munday. She is survived by her children, Brett (Sharon) Anderson, of Oklahoma City, Oklahoma, Kyle (Ben) Hwang of Omaha, Christy (Jim) Conrad of Fremont, Susan Munday of Cheyenne, Wyoming, grandchildren Kristine Keys, Allison Suther, RaeAnn Gebhart, Mikayla Vogt, Jessica Conrad, Jacob Anderson, Cole Conrad, 9 great-grandchildren and many other family and friends. Memorials may be directed to Nebraska Chapter Alzheimer's Association or St. Jude's Children's Research Hospital in lieu of flowers. Condolences may be left at www.duganchapel.com Memorial services will be held Friday, June 18, 2021 at 11AM at St. James Episcopal Church in Fremont.

Barbara H. Munday, age 87, of Fremont, passed away Wednesday, June 2, 2021, at Shalimar Gardens in Fremont. Barbara was born December 5, 1933, in Clarksburg, West Virginia, to Hale and Gladys (Selvey) Wilson. As a child she moved to Omaha with... View Obituary & Service Information

The family of Barbara H. Munday created this Life Tributes page to make it easy to share your memories.

Send flowers to the Munday family.