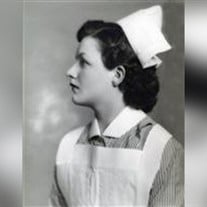 Barbara Ann "Penny" Reeder, 94, Fremont, died Friday, June 11, 2010 at Nye Pointe Health & Rehab Center. She was born in Avoca, Iowa on October 14, 1915 to Gail and Leora Penrod. The family moved to David City, Nebraska in 1921. She graduated from David City High School in 1933. She attended the University of Nebraska and entered the nurses training program and graduated from Methodist Hospital as a Registered Nurse in 1937. Barbara married Dr. Robert Reeder in 1938 at David City. Early in their marriage, Dr. Bob was called up to serve in the United States Army. During World War II he spent five years stationed in Hawaii as an Army surgeon. After his discharge from the army in 1948, the family moved to Fremont, Nebraska. Penny worked as a Registered Nurse at the Dodge County Memorial Hospital, alongside her husband, for many years. She was a member of the Hospital Auxilery, Fremont Golf Club, St. James Episcopal Church, and St. Anne's Guild. She is survived by one son, Robert (wife Lettie) Reeder of Nixa, Missouri. One daughter, Jane (husband Vern) Gibson of Fremont. Four grandchildren, Rob & Steve Reeder, Sarah Meyer, John Gibson, seven great grandchildren, Christina, Jennifer, and Michael Reeder, Annabelle & Madeline Meyer, Grant and Zachary Gibson. Preceeded in death by her husband Robert in 1987, her parents and her brother, Alan Penrod. Services will be at Dugan Funeral Chapel on Saturday, June 19th, 2010 at 10:00A.M. Closed casket visitation will be at Dugan Funeral Chapel, Friday, June 18th, 2010 from 3:00PM to 8:00PM, with family present from 6pm to 8pm. Burial will be at Memorial Cemetery. Memorials have been establised to the Fremont Area Medical Center and St. James Episcopal Church, and Odyssey Health Care Hospice. Condolences may be left at www.duganchapel.com

The family of Barbara Ann Reeder created this Life Tributes page to make it easy to share your memories.

Send flowers to the Reeder family.