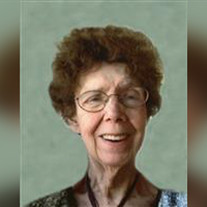 Bonnie F. Owston, age 74, of Fremont passed away Tuesday, December 8, 2015 at Fremont Health. Bonnie was born July 23, 1941 to Rudolph and Edna (Stork) Fuchs. She was a lifelong resident of the Fremont and Arlington area having been raised... View Obituary & Service Information

The family of Bonnie F Owston created this Life Tributes page to make it easy to share your memories.

Send flowers to the Owston family.