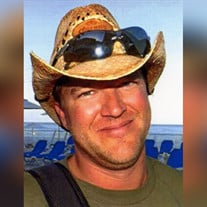 Bryan D. Muhlbach, age 40, of Fremont, passed away Monday, July 17, 2017 in Omaha. Bryan was born January 18, 1977, to Donald "Mike" Muhlbach and Stephanie Muhlbach in Grand Island. Bryan grew up and attended Grand Island High school. After high school, he met the love of his life Candy Burris, they were married May 4, 2002. Bryan loved spending time with his family and friends, riding his motorcycle and being an avid Raiders and Husker fan. He is preceded in death by his parents and grandparents. He is survived by his wife Candy, daughter Bryana, sons Quinton and Lars, grandson Easton, brothers Shane, Zach (Kim), Cody Muhlbach, sister-in-law Cindy (Kelly) Weirich, brother-in-laws Chuck (Lisa) Burris, Kevin (Valerie) Burris, mother and father-in-law Sylvester and Joann Burris and many nieces, nephews, family, friends and his beloved dog Izzy. Memorials may be directed to the family. Condolences may be left at www.duganchapel.com Visitation will be held Thursday, July 20, 2017 from 5-8PM with family present from 5-7PM at Dugan Funeral Chapel. Funeral Service will be Friday, July 21, 2017 at 11AM at the Arlington Community Church.

The family of Bryan D. Muhlbach created this Life Tributes page to make it easy to share your memories.

Send flowers to the Muhlbach family.