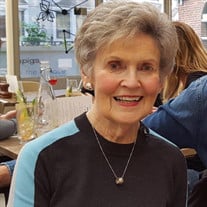 Carol Ann Link Waring, 86, died in hospice care at Dunklau Gardens on August 25, 2021. She was born in Lincoln, Nebraska on February 3, 1935 and grew up in Ainsworth, Nebraska where she graduated from high school in 1953. As a student at the University of Nebraska- Lincoln, she was a member of Delta Gamma sorority, crowned Homecoming Queen in 1955 and graduated in 1957. Carol married Dr. F. Thomas Waring on June 21,1957 and moved to San Francisco, California where Dr. Waring served in the U.S. Army. He completed his medical training in three years. Carol and Tom then moved to Ft. Meade, Maryland where he finished his Army service. In 1961, the couple moved to Fremont, Nebraska where Carol was active in many organizations including Fremont Family YMCA Board (Chairperson), Fremont Area Community Foundation, Fremont Health Foundation Board, Fremont First United Methodist Church Board of Trustees, Priscilla Flower Mission, Chapter EX of PEO, Nebraska Humanities Council, UNL Chancellor’s Advisory Board and Friends of Lied. During their 64 year marriage, Carol and Tom relished traveling all over the world. London and Paris were favorite destinations. Her range of interests included bridge, golf, book club and piano. She was often in demand to play Christmas carols for her friends at holiday parties. Carol was also the consummate hostess and received tremendous satisfaction in creating memorable meals for friends. She always made sure that anyone working in her yard on a hot day would be served cookies and a cold drink. Her grandchildren never tired of “Mimi’s Burgers” and shakes served in red Husker mugs. Carol’s philosophy of life was simple, yet powerful. Choose to put a smile on your face every morning, always do your best and treat other people the way you want to be treated. She instructed her children in the importance of calling people by name at school or in the workplace. She firmly believed that most misunderstandings could be resolved by putting yourself in the other person’s shoes. These principles were honed at UNL where she was involved in the Lincoln Project with Dr. Don Clifton, who went on to found SRI, which later became Gallup, a worldwide leadership training organization. Carol was preceded in death by her parents H.D.and Thelma Link. She is survived by her husband Tom, daughter Susan (Joe) Rebein, son John (Christine) Waring and grandchildren Will and John Rebein, Hannah and Ava Waring, Sarah O’Brien and brother John (Lisa) Link. Visitation will be Thursday, September 2, 2021 at Dugan Funeral Chapel from 4 p.m. to 6 p.m. Memorial service will be held on Friday, September 3, 2021 at 11:00 a.m. at Fremont First United Methodist Church. The family respectfully requests masks at both events. Memorials are suggested for Fremont First United Methodist Church, Fremont Area Community Foundation or Fremont Health Foundation.

Carol Ann Link Waring, 86, died in hospice care at Dunklau Gardens on August 25, 2021. She was born in Lincoln, Nebraska on February 3, 1935 and grew up in Ainsworth, Nebraska where she graduated from high school in 1953. As a student at the... View Obituary & Service Information

The family of Carol A. Waring created this Life Tributes page to make it easy to share your memories.

Send flowers to the Waring family.