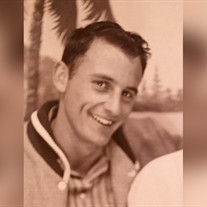 David B. "Blayne" Holbrook age 83, of Fremont, passed away Wednesday, July 26, 2017 at his home. Blayne was born October 26, 1933, in Perkins, Oklahoma. Blayne attended and graduated from Perkins High School. Following high school, he entered the military. He was stationed in Fort Lewis, Washington where he trained as a Medic in the Army in preparation for the Korean War. Following his honorable discharge in 1955, he became a pipefitter. Blayne was a member of Local 464 Steamfitters & Plumbers for 49 years. Blayne was an angler, animal lover, athlete in his earlier life, pipefitter and classic country music lover. He and his wife enjoyed making metal sculptures created out of old pipe scrap. He loved spending time with his family and watching western movies. He is preceded in death by his mother Vera Cooper and stepfather Donald Cooper. He is survived by his three daughters Angela Reeg, Jill Camden and Penny (Blaine) Wilcoxson, grandchildren David (Nicole) Reeg, Daniel Reeg, Jordan, Jeret and Jack Camden, Barrett and Helena Wilcoxson, great-grand daughter Claire Reeg, nieces, nephews, family and many friends made at his home at Stanton Tower. Condolences may be left at www.duganchapel.com Memorials may be directed to Care Corps Family Services 723 N Broad St. Fremont, NE 68025 or Fremont Housing Authority 2510 N Clarkson St. Fremont, NE 68025. A private family service will take place in Perkins, Oklahoma, at a later date.

The family of David "Blayne" B. Holbrook created this Life Tributes page to make it easy to share your memories.

David B. &quot;Blayne&quot; Holbrook age 83, of Fremont, passed away Wednesday,...

Send flowers to the B. Holbrook family.