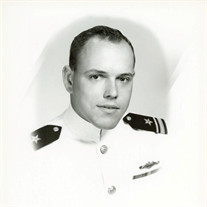 David A. Shelso died in Fremont, NE on June 24, 2021. He was 87 years old. David was born in Minneapolis, MN. Throughout his childhood he often spent summers at his maternal grandparent’s farm in Fergus Falls, MN. He was active in sports, boy scouts and played the piano and the trombone. While at Roosevelt High School in Minneapolis he played football and became an Eagle Scout. In 1952 he was appointed to the U.S. Naval Academy by Hubert Humphrey. While at the Naval Academy he played in the drum and bugle corps. From the Naval Academy he reported to the USS Rochester, flagship of the 7th fleet. In 1957 he was sent to submarine school. In 1958 he was assigned to the USS Chivo in Key West. He served aboard the USS Tecumseh, the first Polaris submarine assigned to the Pacific Fleet. He also served on the USS Carbonero, the USS Merrik and finally the USS Pussumpsic. While on submarines he would be deployed for nine months at a time without any communication home. In 1970 he was sent back to the Naval Academy as a Commander where he taught and then served as the Assistant Dean for Faculty and Finance. He was the officer representative to the golf team. Golf was a passion and he continued to play throughout his life. From Annapolis he was sent to Athens, Greece to serve as the senior U.S. Representative on the NATO staff. After 24 years of service to the United States, David retired in 1978 to Fremont, NE. In Nebraska he worked for Peter Kiewit and then Northwestern Mutual Life. He continued to be an avid golfer at the Fremont Golf Club and was active in the Nebraska Golf Association. He was also active at St James Episcopal Church in the choir and as a reader, the Rotary club, the Masons, and he served on the board Public Works and the Department of Natural Resources. He was and devoted Husker fan and loved his dogs – all named Barney. He is survived by his son, John Shelso and his daughter, Ann Haynes as well as five grandchildren. Memorial Service, July 2, 2021 at 11:00 AM at Dugan Funeral Chapel in Fremont. He will later be interred in the columbarium at the U.S. Naval Academy Cemetery in Annapolis, MD. In lieu of flowers, please make a donation to the Dodge County Humane Society. Condolences may be left at duganchapel.com Dugan Funeral Chapel 402-721-2880

David A. Shelso died in Fremont, NE on June 24, 2021. He was 87 years old. David was born in Minneapolis, MN. Throughout his childhood he often spent summers at his maternal grandparent&#8217;s farm in Fergus Falls, MN. He was active in... View Obituary & Service Information

The family of David A Shelso created this Life Tributes page to make it easy to share your memories.

Send flowers to the Shelso family.