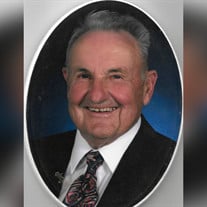 Dennis J. “Denny” Zakovec, age 91, of Fremont, passed away on September 12 at Nye Legacy, surrounded by family. Denny was born in Morse Bluff, NE on December 27, 1925 to James and Winifred (Macholan) Zakovec. The family moved to Fremont when Denny was two. He graduated from Fremont High School in 1944 and enlisted with the Army Air Corp on February 3, 1944. He was commissioned as a navigator on August 24, 1945. Upon his discharge in 1946 he attended Midland Lutheran College. In 1947 Denny entered into partnership with his father in the retail liquor business. In 1968 he relocated “Denny’s” to 16th & Bell in Fremont. During the next several decades Denny purchased and developed many commercial real estate properties in Fremont. He retired from the retail liquor business in 1998 after 51 years. In his retirement he enjoyed overseeing and improving a family farm.Denny married Ardes Oakeson of Wahoo on April 15, 1950 in Fremont. They made their home in Fremont and welcomed two daughters, Patricia Ann in 1962, and Jan Elizabeth in 1968. In the 1950’s Denny played baseball with the Pioneer League in Wahoo, Schuyler, and Fremont. Later in life, he played slow-pitch softball with the Nebraska Senior Softball League well into his 80’s. The League awards a “Denny Zakovec Spirit Award” annually to commemorate Denny’s youthful enthusiasm for the game. Denny was an avid outdoorsman and enjoyed duck hunting and fishing. Denny and Ardes enjoyed attending Midland University functions, especially basketball games, and supported the University in various ways. Denny loved spending time with his children and grandchildren. He was a benevolent lover of people. Denny was a member of St. Patrick’s Parish in Fremont for many years, before attending Trinity (Life Gate) Interdenominational Church in Omaha. He joined Westside Baptist Church in Omaha in 2000 after returning from a trip to Israel, where he was baptized in the Jordan River. Since his move to Nye Legacy in December, 2014, he has enjoyed visits from Sinai Lutheran Church. Denny was a member of the American Legion Post #20. Military Honors will be provided by VFW Post 854 and American Legion Post 20. Denny is survived by daughters and sons-in-in-law Patty and Steve Carr of Fremont, and Jan and Chuck Sinclair of West Des Moines, IA; grandchildren Natalie and Justin Zabrocki of Omaha, Hilary Carr and Rachel Goerke of Omaha, Graham Carr of Arlington, Hannah Sinclair of Seville, Spain, and Rachel Sinclair of West Des Moines, IA; and great granddaughter Hazel Anne Zabrocki of Omaha. He was preceded in death by his wife, Ardes; parents, James and Winifred Zakovec; and brother 1st Lt. Eugene Zakovec. Memorials may be made to Nebraska Senior Softball Association, or Midland University.

The family of Dennis J. Zakovec created this Life Tributes page to make it easy to share your memories.