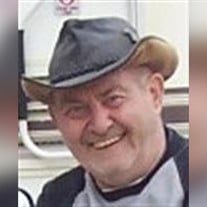 Dennis Galand Mumm, 71, passed away in Omaha, Nebraska at the University of Nebraska Medical Center on December 31st, 2010.   Dennis was born in Center, Nebraska on August 29th, 1939 to Hans and Ann Mumm. Dennis pursued a 20 year career in the service with the Unites States Navy. There Dennis was a engineermen with the fleet maintenance on the USS Vernor County [LST-1161] among nine other ships. While in the Navy Dennis married his first wife of 9 years Ursula Mumm. After retiring from service he then came to Fremont in 1976 and became a successful and well-known entrepreneur in the automotive and welding field by becoming the sole owner of Denny’s Automotive and Co-owner of D&G Welding.  Dennis was an avid mechanic having constructed many of his own vehicles and specialty equipment in his shop. He then got married to his second wife of 14 years Cindy Mumm of Fremont. Dennis above all else loved riding any one of his motorcycles, which included many trips to Sturgis, South Dakota. He and Cindy traveled across the country in their RV to take in a road trip many times. He was a consummate provider for his family, friends and neighbors and assisted many when he got a call for help.  He will be remembered for his “try anything” attitude and good humor among his buddies and those close to him.  Dennis is survived by his sisters Eunice Guhde, and Susan Benjamin as well as his devoted wife Lucinda Mumm and his children, Mary Anne, Mandi, Annie Meneses and step children Sonja Prichett, Jamie, Ashley, Quintana, and Mary Phillips. Dennis was preceded in death by half-brother Bobby Harmier, brothers Hans “Junior”, Darrell, and sisters Alta Mae Benjamin, and Georgiann Haltman. Survived By: Wife Lucinda Mumm ~ Daughter Mary Ann Mumm, ~ Daughter Mandi Rae Mumm ~ Daughter Annie Mae Meneses, son in law Mario & granddaughters Haley & Carmen ~ Step-children Daughter Sonja, grandson Cody Allen & granddaughters Kaitlynn & Clara ~ Jamie Justine Phillips ~ Ashley Phillps ~ Quintana Phillips & son Shane Antonio Hartgrave – Phillips ~ Mary Phillips     Visitation services will be held from 4:00 to 8:00 PM on Wednesday, January 5th, at Dugan Funeral Chapel, 751 North Lincoln Avenue, Fremont, NE.  Funeral services will be held 10:00 AM Thursday, January 6th, at Dugan Funeral Chapel. Dennis will be laid to rest with full military funeral honors at Ridge Cemetery, Fremont, NE.  Chaplain Scott Jensen is officiating.

Dennis Galand Mumm, 71, passed away in Omaha, Nebraska at the University of Nebraska Medical Center on December 31st, 2010.   Dennis was born in Center, Nebraska on August 29th, 1939 to Hans and Ann Mumm. Dennis pursued a 20 year career in... View Obituary & Service Information

The family of Dennis G Mumm created this Life Tributes page to make it easy to share your memories.

Dennis Galand Mumm, 71, passed away in Omaha, Nebraska at the...

Send flowers to the Mumm family.