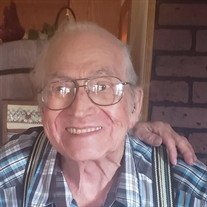 On January 26th 1942 Charlotte Fisher brought Donald Joseph home to meet his siblings Charlotte (Babe), Gladys (Boots), John and Frank. He was a natural artist with a keen, analytical mind and hands that allowed him to build, fix or create anything he could conceive. On December 2nd 1962 he married Dianna Brandon. For the next sixty years through every adventure, trial and triumph the pair were inseparable. They started with nothing but an incredible amount of hard work. With it they built a career, house, and a family. In July of 1967 his cherished son Michael Joseph was born. Being the head of his small family meant the world to him...and to us. In 1963, he began working for Paden Construction. He was tasked with everything from back-breaking manual labor and operating heavy equipment to figuring out jobs with complex scale and scope. He learned tips and tricks on site but was largely self-taught, figuring out ways to get the job done through reasoning and strength. He was a man's man and although he did not attract attention to himself, his work did. Men from other job sites would come from all over just to watch him work. He was a man who really could do it all. After 43 years of service Don retired at age 62. His boss Lee Paden had become more than an employer, she had become a dear friend who he thought of as part of his family. Through it all his biggest fan was always his wife Dianna with whom he loved taking trips around the country and spending weekends closer to home fishing. While most men have man-caves he had a man-kingdom. He amassed enough tools and equipment to fill a garage bigger than his home (as well as a few sheds and a much of the backyard!) He lived a life shaped by skill and sacrifice, inspiration and ingenuity, creating new projects of every kind until literally his last day. These were among the many blessings to be appreciated: On the last day he saw his son he said the thing he was most grateful for was that Michael had baptized him five years prior, and that he got to spend his life with his beautiful wife who he could not have lived without. A week later, after getting into bed for what would be the last time his final words were to make sure his wife knew he loved her, always. We give thanks to God for His mercy and grace and for the life of Donald Fisher who will be loved forever.

On January 26th 1942 Charlotte Fisher brought Donald Joseph home to meet his siblings Charlotte (Babe), Gladys (Boots), John and Frank. He was a natural artist with a keen, analytical mind and hands that allowed him to build, fix or create anything... View Obituary & Service Information

The family of Donald Joseph Fisher created this Life Tributes page to make it easy to share your memories.

Send flowers to the Fisher family.