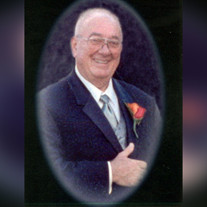 Donald (Don) W. Vodehnal of Fremont, NE passed on October 7, 2019 in Lincoln, NE. Don was born May 2, 1932 in Loup City NE to William and Emma Vodehnal. He graduated from Loup City High School in 1950 and went to work for Loup Valley Transfer. He was called to serve in the Army in 1951 stationed at Fort Riley until his discharge from Fort Carson in 1953. Don and the love of his life Lorraine Tesmer were married on August 23, 1952 and produced Janel (1953), Bill (1954), Kris (1955) and Jon (1967). After two years at the Boyles Van Sant Business School in Omaha, Don moved his family to Chadron in 1956 working as an accountant for Ross Transfer. In 1959, a move to Norfolk started a 31-year career with Bankers Life/Ameritas selling insurance and investments. Don was transferred to Fremont in 1964 and later finished his career with Action Sports Advertising and Promotions until his retirement in 2011. Don’s passion for people, his church and his community played out in many ways. In Fremont, he earned the Knights of Columbus 4th Degree and served as Grand Knight of the Phil Sheridan Council 1497. As a Cosmopolitan Club leader, Don helped restart the Fremont July 4 fireworks celebration and earned the ‘Mr. Firecracker’ award. He also served as treasurer of American Legion Post #20 and was a dedicated AA member of 29 years. Don Vodehnal was an engaging people person, avid sportsman, dedicated duck hunter and Husker fan who will be best remembered as an amazing, fun-loving Dad and Gramps. Don is preceded in death by Lorraine (2005), his wife of 53 years, his mother Emma (1997) and father William (1949). He is survived by daughter Janel Hibberd and husband Chuck (Lincoln), their son Matt and wife Ashley and children Will and Claire (St Louis MO), and daughter Katie (Lincoln); son Bill (Bassett) and significant other Julie Jarose; daughter Kris Scheer and husband Randy (Lincoln); son Jon and wife Deidre and children Brady and Stella (Stevensville MD). Family and friends are invited to a wake service from 6:00-8:00 pm, Thursday, October 10, 2019 at Dugan Funeral Chapel in Fremont. Don’s life will be celebrated at 10:30 am Friday, October 11, 2019 at St. Patrick’s Catholic Church in Fremont followed by interment at Calvary Cemetery. Memorials can be directed to the Fremont Area Alzheimer’s Fund, Fremont Health Foundation Diabetes Education Program or Fremont Ducks Unlimited Chapter.

Donald (Don) W. Vodehnal of Fremont, NE passed on October 7, 2019 in Lincoln, NE. Don was born May 2, 1932 in Loup City NE to William and Emma Vodehnal. He graduated from... View Obituary & Service Information

The family of Donald 'Don' W. Vodehnal created this Life Tributes page to make it easy to share your memories.