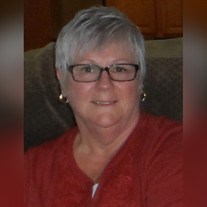 Dorothy A. Shaw Parks, age 65 of Fremont, passed away Saturday, November 5, 2016, at her residence. Dorothy Alice Shaw Parks was born to Merlyn and Ruby Shaw in O’Neill, NE on July 15, 1951. She graduated from O’Neill High School in 1969. Dorothy A. Shaw married Ted A. Parks, a real hunk, in July of 1971. The marriage was fruitful and two wonderful blessings in the form of Michelle Lynn and Ryan Andrew were added to the family. After years of working in local supermarkets, Dorothy went back to college to become a radiologic technologist. She graduated at the top of her class from Immanuel in 1989 where she would work for a short time before taking a job at Methodist Hospital. She was a fan of dangly earrings, “romance” novels, flowers, movies and dogs! Her greatest joy in life was her family. She may have been short in stature but never short on opinions, wit and humor. She gave the best hugs and had the greatest laugh. Dorothy was diagnosed with stage 4 pancreatic cancer in December of 2015. Following a good fight, she went home to be with God on November 5, 2016. She is preceded in death by her father, Merlyn, many aunts, uncles, family members and her beloved dogs Zeke, Sadie, Bashful and Dolly. She is survived by her husband of 45 years, Ted Parks; children Michelle (Gary) Parks of Omaha and Ryan (Chasi) Parks of Lincoln; three grandchildren, Jarret, Avery and Phoenix; mother, Ruby Shaw of O’Neill; brother, Marty (Colette) Shaw of Page; sister, Dixie Aller of Roseville, CA, In-laws, Jim Parks of Carmel, IN, Dona Trowbridge of Page, Virgil (Pauline) Parks of O’Neill and Maryln (Ken) Kucera of Clarkson, several aunts, nieces, nephews, cousins, family and friends. Please visit www.duganchapel.com to leave an online condolence. Memorial Services will be held at 11:00 AM on Tuesday, November 15, 2016 at Dugan Funeral Chapel. Pastor James Jost will be officiating.

The family of Dorothy A Parks created this Life Tributes page to make it easy to share your memories.

Dorothy A. Shaw Parks, age 65 of Fremont, passed away Saturday,...

Send flowers to the Parks family.