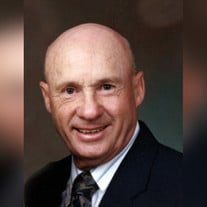 Edwin E. Cooper, age 84, of Fremont, passed away Wednesday, June 15, 2016, at Dunklau Gardens. Edwin was born on December 3, 1931, at St. Edward, Nebraska, to Arthur and May Cooper. He attended elementary and high school there, graduating in 1949. He also graduated from Midland College in June of 1958. He married Beverly Swanson on October 20, 1951 at the Albion, Nebraska, Methodist Church parsonage. They moved to Columbus, Nebraska, where Edwin worked at Swift & Company until he was drafted into the military service on August 5, 1952, and was stationed at Fort Leonard Wood, Missouri. After his discharge from the military service in August, 1954, they moved to Fremont. Edwin attended Midland College and worked for the George Hormel Company for 39 years. He was a member of the First United Methodist Church and the North Bend Golf Course. He was preceded in death by his parents, two sisters and 3 brothers. Edwin is survived by his wife Beverly of 64years, son Kent Cooper of Sioux Falls, South Dakota, two daughters Susan (Bob) Starman of Omaha, Kathy (Bradley) Bloemker of Marshall, Minnesota, three grandchildren Kelsey, Zachary, Malia, one brother Bill Cooper of Madrid, Nebraska, as well as many other family and friends. In lieu of flowers, memorials may be directed to the Nebraska Children's Home Society, Fremont Area Alzheimer's Committee, or First United Methodist Church. Condolences may be left at www.duganchapel.com Visitation will be Sunday, June 19, 2016 from 2:00-5:00PM at Dugan Funeral Chapel. Funeral Service will be Monday, June 20, 2016 at 11:00AM at First United Methodist Church with Pastor Gregg Hall officiating. Burial will take place at Memorial Cemetery.

Edwin E. Cooper, age 84, of Fremont, passed away Wednesday, June 15, 2016, at Dunklau Gardens. Edwin was born on December 3, 1931, at St. Edward, Nebraska, to Arthur and May Cooper. He attended elementary and high school there, graduating... View Obituary & Service Information

The family of Edwin E Cooper created this Life Tributes page to make it easy to share your memories.