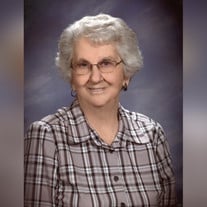 Elizabeth (Betty) Updike, age 94, of Fremont, passed away Thursday, August 3, 2017, at Nye Legacy. Betty was born September 11, 1922, to Jack and Madge (White) Barada in Rosalie, Nebraska. She was the second daughter born to the family that would later total 8 children. Betty was a 1939 graduate of Lyons High School. Betty married Kenneth Updike on July 3, 1943. She worked at the 'bomber plant' during World War II and later became a stay at home mother until the children were grown. She later worked at Pendleton Woolen Mills until her retirement, which was necessitated by the need to play more golf! An avid golfer, she played and placed in many tournaments around the state and even scored a hole in one. She also enjoyed bowling, was inducted into the Fremont Area Bowlers Hall of Fame in 1982, and was a member of the 600 Club. Playing cards, sewing, gardening and in her early years, square dancing were among her other interests. She was preceded in death by her husband Kenny, daughter and son-in-law Sharon and C.H. Grubb, son Harold Updike, brothers Rex, Kenneth, Dale and William Barada, sisters Althea Byers and Charlotte Slaughter. She is survived by her daughter in law Wilma (Kraemer) Updike of Waterloo, two grandsons Matthew (Dawn) Updike of Fremont, Jules (Ashley) Updike of Omaha, three great-grandsons Evan and Andrew Updike of Fremont and Jack Updike of Omaha, sister Jo Ann Kubik of Casa Grande, Arizona, and many nieces and nephews. Condolences may be left at www.duganchapel.com Memorials may be directed to the family for a scholarship to be designated. Visitation will be held Sunday, August 6, 2017 at Dugan Funeral Chapel from 3-6PM. Funeral Services will be held Monday, August, 7, 2017 at First United Methodist Church at 10:30AM. Private family burial will take place at Ridge Cemetery.

Elizabeth (Betty) Updike, age 94, of Fremont, passed away Thursday, August 3, 2017, at Nye Legacy. Betty was born September 11, 1922, to Jack and Madge (White) Barada in Rosalie, Nebraska. She was the second daughter born to the family that... View Obituary & Service Information

The family of Elizabeth (Betty) Updike created this Life Tributes page to make it easy to share your memories.

Send flowers to the Updike family.