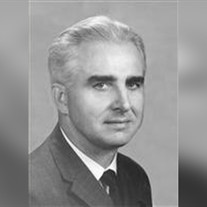 George E. Svoboda passed away Wednesday, April 13, 2011 at Nye Legacy Rehabilitation Center in Fremont. George was born December 12, 1917, in Omaha, Nebraska, the son of Emil and Emily (Spatz) Svoboda. He graduated from Linwood High School in Linwood, Nebraska, and graduated from Nebraska University of Lincoln in 1939 with a BA Degree and ROTC Commission as a 2nd Lieutenant. He then attended the University of Missouri at Kansas City, Missouri in 1942, with an LLB Degree and was licensed to practice law in Missouri He entered into military service in the Army at Camp Wolters, Texas, as 2nd Lieutenant on March 2, 1942 and was later assigned to the 43rd Infantry Division, which was deployed to Auckland, New Zealand. He was then transferred to the U.S. Army Headquarters (USAFISPA) in the South Pacific area at Auckland, New Zealand as an Assistant Provost Marshall. His next highest command authority was Admiral “Bull” Halsey. George then was transferred to Noumea, New Caledonia, first as Provost Marshall, then he was assigned as the QM officer and had the good help of Sgt. Sid Sandoz of Opelousas, Louisiana. He left active duty service in 1945 as a Major. He was in the U.S. Army Reserve after WWII as Lieutenant Colonel Commander of the 809th Quartermaster Battalion in Fremont, Nebraska, until 1971. Then he served the U.S. Army Reserve as a Colonel in the U.S. Army Log Command in Omaha from 1971-1977 when he retired. George was licensed to practice law in Nebraska in 1946, and began practicing in Fremont at the Sidner, Lee, Gunderson, and continued to practice in the same firm, now named Sidner, Svoboda, Schilke, Thomsen, Holtorf, Boggy, Nick, and Placek which has been in existence for over 100 years. He retired from the firm January 1, 2002, and was licensed to practice in the Nebraska State and Federal Courts and the U.S. Supreme Court. George Svoboda married Melrae L. Anderson on January 3, 1949 in Fremont, Nebraska George was the City Attorney for Fremont from 1949-1950 and 1952-1954, President of the Fremont Junior Chamber of Commerce in 1953, he was the Deputy County Attorney for Dodge County from 1956-1959, as well as President of the Kiwanis Club in 1958. He was the Mayor of Fremont from 1959-1961 and during his tenure he established the position of City Administrator and appointed Jack Sutton. George was President of the Nebraska Association of Trial Attorneys from 1963-1964, President of the Fremont Golf Club in 1965, Chairman of the House of Delegates of Nebraska State Bar Association from 1975-1977 and member of the Nebraska and the American Bar Associations. He was a member of the American Legion, a lifetime member of Veterans of Foreign Wars, Member of Fraternal Order Eagles AERIE #200, Trustee of Memorial Cemetery, and President of the Nebraska State Bar Foundation from 2002-2005 Survived by: Daughter Janene Ann (Michael) Brandenburg of Vienna, Virginia Sons James Paul (Debra) Svoboda of Kansas City, Missouri; Mark Andrew Svoboda of Golden, Colorado Three grandchildren; Eva Brandenburg of Vienna, Virginia, Christopher and Benjamin Svoboda of Kansas City, Missouri Many other friends and family Preceded in death by his wife Melrae Visitation: Sunday, April 17, 2011, from 3:00-7:00 PM with the family present from 4:00-6:00 PM Funeral Services: 10:00 AM Monday, April 18, 2011, at Dugan Funeral Chapel Interment: Memorial Cemetery

The family of George E Svoboda created this Life Tributes page to make it easy to share your memories.

Send flowers to the Svoboda family.