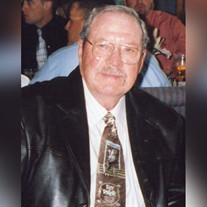 George W. Waggoner, age 79 June 25, 1940 - March 27, 2020 One part artist, one part military man, George Waggoner was an enigma. He wove these two threads into the blanket of his life, which he threw onto the back of his horse under a saddle and rode off into the sunset on Friday, March 27, 2020. Though he survived two wars, the forces of kidney disease and pneumonia proved to be insurmountable foes. Born June 25, 1940, in Powell, Wyoming, George’s lifelong love affair with the American West and cowboy life began at Pahaska TeePee, where he lived in a wooden-floored tent with his folks, Kenneth “Pee Wee” Waggoner and mother Frances. It was there that George burned his arm on a woodburning stove, leaving a prominent scar that he would jokingly tell others was the result of a snakebite. Later in his childhood, the family called Buffalo Bill’s TE Ranch their home, where Pee Wee worked as a cowboy and Frances as a cook on the ranch. An avid reader, George spent many an hour with his nose in a work of Western fiction or non-fiction, reigniting these early childhood memories. He adorned his home and Colorado cabin with the works of his favorite painter, Charles Marion Russell. In high school, George proudly wore the Powell Panther mascot as a member of the wrestling team. Of large stature most of his life, it was always hard to imagine his weight class for many years was 99 pounds. As wild as the stallions he loved so much, George once brought one home and tied it to the garage, much to the chagrin of his parents. As a teen, his prize possessions were hot cars that included an old Model T Ford, which he painted baby blue, and a Dodge Charger that he drove down the highway at over 100 miles per hour in a snowstorm. In 1959, George joined the U.S. Army and three years later married Joan Harriger - two events that gave his life meaning. The first provided him with the opportunity and honor to serve his country, something for which he had a natural aptitude. The latter brought into his life a friendship, romance and love that lasted 58 years. In one of her greatest acts of love, Joan donated a kidney to George, prolonging and improving the quality of his life by eliminating the need for dialysis. Joan was George’s sidekick, life line, nurse, gardening partner, carpentry assistant, art critic, and best friend. George thrived in the military, achieving the rank of E7 in just seven years, and Sgt Major in only 10. He served in Korea from 1964-65 and Vietnam from 1967-68, service for which he was awarded the Bronze Star for meritorious achievement against hostile forces. He was stationed in Frankfurt, Germany, from 1969-1975 and Bad Kreuznach, Germany, from 1978 -1981. He was awarded the Legion of Merit medal during his tour of Vicenza, Italy, from 1983-1985. With a long list of additional service awards, he retired from the military on March 20, 1990, and subsequently offered his financial expertise in a civil service capacity until the year 2000. Camouflaged by a gruff exterior, the artist in George wasn’t as obvious to the outside world as was the soldier, but when faced with a plot of land, beautiful and prolific gardens were cultivated. When presented with a blank canvas, oil paintings of German, Italian and American Western landscapes came to life. When given a piece of calfskin leather, Western floral designs, calligraphy and patterns were tooled with expert precision into wallets, belts, saddles and guitar straps. Wood carvings of cowboys and sunflowers and German still life adorned the homes of those he loved. Preceded in death by his parents Kenneth and Frances Waggoner, George is survived by sisters Sheryl Christensen and Sheila Sales, and brother Phillip Waggoner; wife Joan Waggoner; daughter Shelly and husband Alan Holzerland; daughter Shawn Waggoner and husband Christopher Hudson; grandchildren Sarah Finley, Lee Holzerland and Slaid Waggoner; and four great grandchildren. His family will forever miss his sense of humor, boundless generosity, and strong moral core. We’ll miss his captivating stories, told with amazing detail and recollection. We’ll miss our time at the cabin with him fishing, walking in the woods, shooting guns, and eating his homemade pickles, beef jerky and potato salad. But most of all, we’ll miss the presence of his remarkable strength and individualism, bestowed upon only the best cowboy soldier artists of this world. Condolences may be left at www.duganchapel.com Memorials may be directed to Florissant Volunteer Fire Department Regulated Public Visitation will be held Friday, April 3, 2020, from 5-7PM at Dugan Funeral Chapel. Private family service on Monday, April 6, 2020 at Dugan Funeral Chapel at 11:00 AM To view live broadcast of service go to duganchapel.com, click on the obituary and select watch web cast under the photo. Dugan Funeral Chapel 402-721-2880

George W. Waggoner, age 79 June 25, 1940 - March 27, 2020 One part artist, one part military man, George Waggoner was an enigma. He wove these two threads into the blanket of his life, which he threw onto the back of his horse under a saddle... View Obituary & Service Information

The family of George Walter Waggoner created this Life Tributes page to make it easy to share your memories.

Send flowers to the Waggoner family.