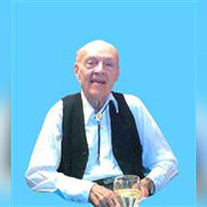 Graydon Wilson, 96, of Fremont died Monday, Dec. 13, 2010, at his home. Graydon was born Feb. 23, 1914, in Ponca City, Okla., and graduated from Ponca City High School, Southwestern College in Winfield, Kan., and Iliff School of Theology in Denver. He served as a Methodist minister from 1932-1975 in Oklahoma, Colorado, Montana and Nebraska. He served as pastor of First United Methodist Church in Fremont from 1958-1968. He was a member of Masonic Lodge, Rotary Club, Fremont Art Association and Arthur Peters Garden Club, as well as participating on several boards. He is survived by: his wife, Florence Marie Lueninghoener; three children, David Wilson of Papillion, Michal Hume of Omaha and Priscilla Wilson of Fremont; grandchildren, Roger Behling of Dalafield, Wis., Tamara Ryan of New Lisbon, Wis., Julie McCann of Rice Lake, Wis., Erica Martinez of Fremont, Melissa Saunders of Omaha and Matthew Wilson of Papillion; and nine great-grandchildren. Graydon was preceded in death by his wife of 64 years, Hortense Peck Wilson; his parents; and three sisters. Graydon was cremated, per his request. A memorial service will be held at 11 a.m. Thursday at First United Methodist Church in Fremont, followed by a luncheon. Memorials may be made to the church.

The family of J. Graydon Wilson created this Life Tributes page to make it easy to share your memories.

Send flowers to the Wilson family.