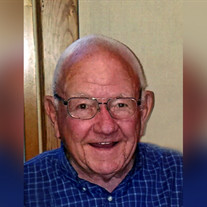 James "Jim" A. Bartosh age 86, of Fremont, passed away Sunday, September 9, 2018, surrounded by his family at home. Jim was born to Albin and Effie (Greever) Bartosh on September 16, 1931, in Dodge, Nebraska. Jim attended and graduated from Dodge High School in 1949. Following, high school he enlisted in the United States Navy. During the Korean War Jim, was stationed on the East Coast and served as a medic. Following Jim's service in the Navy, he attended and graduated from The University of Nebraska at Lincoln with a bachelors in Animal Science. Jim met the love of his life, Marilyn in 1962, and married his wife of 50 years on February 15, 1964. Jim worked as a sales rep for Dealavalve for the eastern part of Nebraska. He then went to work for Wayne Feeds where he worked for many years, before retiring in 1995. Jim loved anytime spent with his family. He enjoyed every chance he had to go fishing, but especially enjoyed the fishing trips to Canada with his buddies. Jim enjoyed working in his garden, cooking, baking bread and drinking beer on his patio. Jim especailly loved his grandchildren and great-grandchildren and the time spent with them. Jim was a member of the American Legion Post #71 of Arlington. Jim was preceded in death by his wife Marilyn, parents and brother Maurice Bartosh. He is survived by his son Jim and wife Tammy Bartosh of Arlington, daughter Lori and husband Todd Hill of Fremont, grandchildren Matt and wife Kara Hill, Nick Hill, Jacque Bartosh, Jake Bartosh, and great-grandchildren Peyton and Quinley Hill, sister in laws Barbara Anderson of Fremont, Macie Bartosh of Dodge, and special friend Theresa Taylor, as well as numerous nieces and nephews. Online condolences may be left at www.duganchapel.com Visitation will be held Thursday, September 13, 2018, from 5-7PM at Dugan Funeral Chapel. Memorial service will be held Friday, September 14, 2018, at 10:30AM at Dugan Funeral Chapel. Chaplin Scott Jensen will be officiating.

James "Jim" A. Bartosh age 86, of Fremont, passed away Sunday, September 9, 2018, surrounded by his family at home. Jim was born to Albin and Effie (Greever) Bartosh on September 16, 1931, in Dodge, Nebraska. Jim attended and graduated from... View Obituary & Service Information

The family of James A. Bartosh created this Life Tributes page to make it easy to share your memories.

Send flowers to the A. Bartosh family.