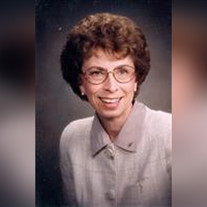 E. Jane Hetrick, 76 Passed away Saturday, August 31, 2013 at Nye Legacy in Fremont Jane was born in Chadron, Nebraska, August 25, 1937 to Charles L. and Edith F. (Newberry) Beers. She graduated from Chadron High School in 1955, then attended Chadron State College for vocal music. She was married August 5, 1956 in Chadron, but later divorced. To this marriage were born four children; G. Loy, Jeffery L., Heather Jane and an infant Randall Roy (who passed away shortly after birth). Jane and her family lived in several small central Nebraska towns including Morrill, Benkelman and Lexington before settling in Fremont in 1964. Jane worked at the Lexington Community Hospital in general patient care, surgical, emergency care, and obstetrics. In Fremont she worked for First National Bank & Trust Company for 17 years as a teller, safe deposit clerk, the trust department, and as a commercial loan secretary. Jane enrolled at Midland Lutheran College to finish her music education degree in 1981 and received her B.F.A in vocal performance with a teaching certificate for K-12 music. Jane taught in Cedar Bluffs, NE for 3 years, then taught elementary music for Fremont Public Schools until her retirement in 1999. Jane's faith in God was a primary part of her life and she felt it was expressed most effectively through her music. Growing up, Jane was a member of the First Baptist Church in Chadron. When she married, she joined the Methodist Church where she was a member until 1996. She joined St. Patrick's Church in 1996. Jane participated in choirs, singing for weddings, funerals, and other special occasions. She directed the adult choir at St. Patrick's Church from 1996 to 2001, then became the assistant choir director. Jane was an active cantor in the liturgies of the church and was certified as a cantor by the National Pastoral Musicians in January 2005. She was also active in developing the Hispanic music ministry of St. Patrick's Church once the church started those services. Other singing ensembles Jane was a member of include; "Die Meistersingers" under the direction of Professor James Elsberry of Midland College, Sweet Adelines, and various informal groups in the Fremont area. Jane is proceeded in death by her infant son Randall Roy, and son Jeffrey Hetrick. She is survived by son G. Loy (Cyndy) Hetrick of Carmel, Indiana, daughter Heather (Scott) Dienstbier of Omaha, daughter in-law Dena and JD of Dix, NE., a sister Nadine Beckenbach, 3 grandchildren Charles Hetrick, Marcia Hetrick, Katrina Dienstbier as well as a host of loving friends and relatives. Funeral Mass will be 10:30 A.M. Monday, September 9, 2013 at St. Patrick's Catholic Church with Father Ronald Battiato officiating. Visitation will be Sunday, September 8, 2013 from 3:00 P.M. to 8:00 P.M. with family present from 6 to 8. A music vigil will be held during the family visitation. A Memorial has been established in Jane's name for music. Condolences may be left at www.duganchapel.com

The family of Jane E. Hetrick created this Life Tributes page to make it easy to share your memories.

Send flowers to the Hetrick family.