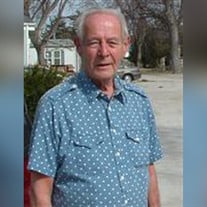 John William (Bill) Charles passed away peacefully on March 23, 2016, at his home in Fremont, Nebraska. He was born July 7, 1928 in Des Moines, Iowa and spent most of his life in the Omaha and Fremont communities. Bill graduated from Omaha... View Obituary & Service Information

The family of John William Charles created this Life Tributes page to make it easy to share your memories.

Send flowers to the Charles family.