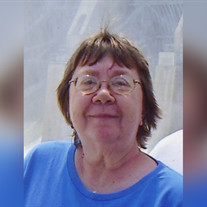 Karen F. Jenkins, age 70, passed away Monday, February 19, 2018 at the University of Nebraska Medical Center in Omaha. Karen F. Jenkins (Anderson), the only child of Kenneth O. Anderson and Bernice Anderson of Blair, was born on April 7, 1947. She lived in Blair until age 16 when she moved with her parents to Fremont. She attended Fremont High, graduating in 1965. There she met her future husband, James P. Jenkins “Jim” in a business law class. They were married on April 10, 1966 at Trinity Lutheran Church in Fremont. After finishing technical school, Jim served in the US Air Force for four years. Karen traveled with him to many of his assignments, including his last one in Roanoke Rapids, North Carolina. During this time, her only child, Jeffrey J. Jenkins was born on November 10, 1967. After Jim’s service in the Air Force was completed, they moved back to Fremont where she lived the remainder of her years. Karen stayed at home raising Jeff until early elementary school when she took a part time job in the back office at Montgomery Ward, where she had worked after high school. In 1985, when started working as a pharmacy tech in the newly opened Wal-Mart store. While she enjoyed working with the public in the pharmacy, she found it heartbreaking when her some of her customers had trouble affording their medications. After she left Wal-Mart, she worked at KFC where she continued to enjoy customer service. Her experience at KFC led Karen and Jim to the purchase of USA Steak Buffet in 2010 after Jim retired. They worked long hours managing the restaurant, but found great reward in serving the public. In addition to their duties in the restaurant, they owned and managed several rental properties, often becoming good friends with the tenants. She often accompanied Jim to meetings for the Cosmopolitan Club, the Eagles Club FOE 200, and the Fremont Antique Car Club. She enjoyed travel. When Jeff was young, the family took many summer “road trips” through the Black Hills, Colorado, and Wyoming, just to name a few. In later years, she and Jim continued to travel, especially to Branson and Florida where she enjoyed the soft gulf sand just to name a few, often in the frequent company of Dan and Marilyn Jirovsky. She cared deeply for animals and always had at least one dog, from Reggie the Pomeranian to Reilly the Chihuahua mix. Finally, Karen had a strong faith. She was a member of Good Shepherd Lutheran Church since 1966. Karen was taken from us much too soon on February 19, 2018. She was preceded in death by her parents, Kenneth O. Anderson and Bernice Anderson. She is survived by her husband, Jim, son, Jeff, daughter-in-law, Molly, and granddaughter Katharine. Visitation: 4:00 - 8:00 PM Thursday, February 22, 2018, at Dugan Funeral Chapel. Family will present from 6:00 - 8:00 PM. Celebration of Life: 10:00 AM Friday, February 23, 2018, at Good Shepherd Lutheran Church. Pastor Mark Weber will be officiating. Burial will take place at the Blair City Cemetery.

The family of Karen Fay Jenkins created this Life Tributes page to make it easy to share your memories.

Send flowers to the Jenkins family.