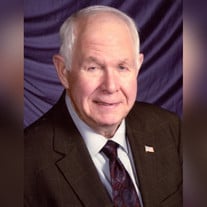 Larrie J. Ferguson, age 80, of Fremont, passed away Saturday, August 25, 2018, at Dunklau Gardens. Larrie was born December 31, 1937, to Leslie and Elsie (Dunker) Ferguson in Fremont. Larrie attended and graduated from Fremont High school in 1955. Following high school, he enlisted into the United States Army where he served until 1958. He served in the Army reserve's until 1962. In 1958, Larrie began his lifelong career as a carpenter. He became a independent contractor in 1983. Larrie married the love of his life Judy Heybrock on April 4, 1964, in Fremont. To this union were born two children Amy and Tim. Larrie had a passion for music, specifically barber shop music. He was a member of the Fremont Pathfinder Chorus. Larrie was his children and grandchildren's biggest fan and would always be found attending their activities. He enjoyed hunting, fishing, golfing and bowling leagues with Judy. He was a member of the Fremont Area Service Club, American Legion Post 158 of Cedar Bluffs, F.O.E 200 Eagles Club, Elkhorn Valley Golf Club and Construction Employers Association. Larrie was very proud of his faith. He was baptized and confirmed at the Presbyterian Church in Fremont, then became a member of Good Shepherd Lutheran Church where he served on many boards and committees in the church. He is preceded in death by his parents, brother Richard, sister Regina Johnson, mother and father in-law Richard and Irene Heybrock and sister in law Kathy Dickmeyer. He is survived by his wife Judy of 54 years, children Amy (Tim) Heimann of Fremont, Tim (Shelli) Ferguson of Fremont, grandchildren Leslie (Andy) Williams, Tyler (Chelsea) Heimann, Ethan & Wes Ferguson, great-grandchildren Courtney & Levi Heimann, Jordan & Savannah Williams, and many other family and friends. Memorials may be directed to Good Shepherd Lutheran Church or the family for later designation. Condolences may be left at www.duganchapel.com Visitation will be held Tuesday, August 28, 2018 at Good Shepherd Lutheran Church from 3-8 with family present from 6-8. Funeral Service will be held Wednesday, August 29, 2018 at Good Shepherd Lutheran Church at 10:30AM. Military honors will be conducted by VFW Post 854 & American Legion Post #20 following funeral service.

The family of Larrie J. Ferguson created this Life Tributes page to make it easy to share your memories.

Send flowers to the Ferguson family.