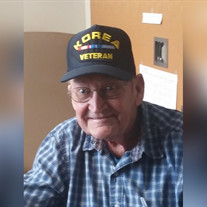 Lauren V. Jensen, age 87 Lauren passed away February 4, 2020 at Dunklau Gardens. He was born to Rudolph and Marguerite (Hasselstrom) Jensen in Cedar Bluffs, Nebraska on November 8, 1932. He was baptized and confirmed at St. Matthews Lutheran Church of Cedar Bluffs. He grew up on a farm near Cedar Bluffs, Nebraska and attended District 60 school and then graduated from Cedar Bluffs High School in 1950. Lauren served in the U.S. Army at Chunchon, Korea and Suwan, Korea until 1954. He married Rose Ann Carlson at St. Matthews Lutheran Church on September 18, 1955. Lauren went to work for Geo. A. Hormel & Co. in 1955 and remained there until his retirement in 1994. While at Hormel he worked in various capacities, but when he had the opportunity to learn more about the machinery at Hormel, he did not hesitate to become one of the guys that kept everything running on a daily basis. He had an avid curiosity and love for machines, how they work and how to repair them when they don't. Lauren is preceded in death by his parents, his wife Rose Ann Jensen and sister Verdelle Banghart. He is survived by his daughter Lynette (John) Bendig of Fremont, son David Jensen of Waterloo, Daughter in law Therese Jensen of Papillion, granddaughters Mary Beth (Chris) Chada of North Platte, Melissa (Clay) Nielsen of Lincoln, Abby Jensen of Papillion and great-grandson Corbin Nielsen of Lincoln, great-granddaughter, Halli Rose Nielsen of Lincoln and his brother Lowell Jensen of Fremont, Nebraska. Memorials are suggested to Veterans Memorial Fund at Memorial Cemetery. Condolences may be left at www.duganchapel.com Visitation will be held Thursday, February 6, 2020 from 4pm to 8pm at Dugan Funeral Chapel. Funeral service will be held Friday, February 7, 2020, 10:00am at Dugan Funeral Chapel. Dugan Funeral Chapel 402-721-2880

Lauren V. Jensen, age 87 Lauren passed away February 4, 2020 at Dunklau Gardens. He was born to Rudolph and Marguerite (Hasselstrom) Jensen in Cedar Bluffs, Nebraska on November 8, 1932. He was baptized and confirmed at St. Matthews Lutheran... View Obituary & Service Information

The family of Lauren Verne Jensen created this Life Tributes page to make it easy to share your memories.

Send flowers to the Jensen family.