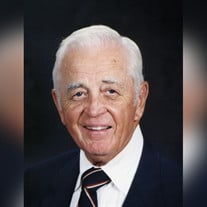 Lawrence "Larry" G. Lefler, age 92, passed away at Nye Legacy on Saturday, June 23, 2018. Larry was born to Glenn and Luella (Collins) Lefler on April 7, 1926, in Wymore, Gage County, Nebraska. He joined Boy Scout Troop #130 and earned his Eagle Scout badge. He graduated from Broken Bow High School in 1944. He entered the United States Army Air Corps and was an air traffic controller until being discharged in 1946. Larry then attended the University of Nebraska eventually being admitted to the Illinois College of Podiatric Medicine and graduating as a Doctor of Podiatric Medicine in 1952. Larry married Victoria "Pat" Blatt in Norfolk, Nebraska, on August 28, 1949. Larry began practicing Podiatric Medicine in Grand Island until moving to Fremont in 1955 where he continued his practice until retiring in 1992. Larry was active in the Podiatric Medical Associations including the Nebraska Podiatric Medical Association and the American Podiatric Medical Association (APMA) and many other Podiatric Boards. He was inaugurated as President of the APMA in 1970. Following his term as President, he later served as their Speaker of the House of Delegates for 10 years. Larry served a term on the Keene Memorial Library Board, was a member of the school board for Fremont Public Schools, and served on the Board of Directors of the Dodge County Humane Society. He was a charter member of the Fremont Sertoma Club and served as it's second President. He was also an active member of St. James' Episcopal Church in Fremont. Larry was an avid Husker fan, enjoyed golf, geneology, civil war history, and spending time with family. Preceded in death by his parents and wife Pat Survived by daughters Susan (Greg) Lefler of Austin, TX, and Mary (Jeff) Collins of Fremont. Grandchildren Callie (Keith) Raby of Cleveland, GA; Skyler Willcockson of Madrid, Spain; Carly (Shane) Winter of Fairbury, NE; Ryan Collins of Fremont; Great Grandchild Presley Winter of Fairbury, NE; Brother Donald Lefler of San Jose, CA; Special friend Bernice Lewis of Fremont, NE; Memorials may be given to St. James' Episcopal Church Please visit www.duganchapel.com to leave an online condolence. Memorial Services will be held on Wednesday, June 27, 2018, 10:00 A.M. at St. James' Episcopal Church. Mother Sarah Miller will be officiating. Inurnment: Memorial Cemetery

The family of Lawrence Larry G Lefler created this Life Tributes page to make it easy to share your memories.