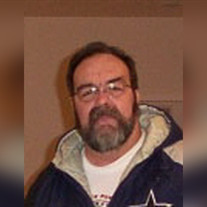 Lee E. Callahan, 65 years-old of Fremont, Nebraska, passed away on February 18th, 2017 at his residence. Lee was born on February 9th, 1952 in Virginia Beach, VA, to Myron and Alberta (Meier) Callahan. His family moved to Fremont in 1960, and Lee was a 1970 graduate of Fremont Senior High School. He attended Western Tech school in Denver and later moved back to Fremont, working several years for both Vigortone and Christensen Lumber. Lee married Margaret Pollard on August 9th, 1980, in Fremont and had two sons. In the early 90's, he began a career that spanned 18-years with Gene Steffy's as a service writer. Lee was appreciated and loved by his customers, many of them writing the dealership over the years to make sure the owner knew what a special employee he was. Later on, Lee had a short career driving for a local trucking firm. Single later in life, Lee met Cindi Schumacher and had a special relationship with her. Together they went on many travels, be it flying to Florida to ocean-fish with Cindi's brother Randy, or driving cross-country to assist with dog rescues. He loved the sport of bass fishing, and had been a member of the Fremont Anglers Association for well over 20 years. He loved fishing and camping out there, as well as lending a hand to help with maintenance of the property whenever the opportunity arose. He also enjoyed spending time at the shop with his brothers where he worked on his dream car, a 1963 Chevy Nova that he built from the ground up. Lee loved spending time with his grandchildren and cherished every moment he could spend with them. He is survived by his significant other, Cindy Schumacher of Fremont and her children Natasha and Brandon; son Jeffrey (Stefanie) Callahan of Waterloo; brothers Mike (Patti) Callahan of Fremont, Ron Callahan of Omaha, Brent (Connie) Callahan of Fremont, Bruce (Peggy Helget) Callahan of Fremont; grandchildren Nathan, Pearl and Jaydin, grandchild of Cindi who Lee considered his own; many nieces, nephews, family and friends. Preceded in death by his parents Myron and Alberta Callahan; nephew Chad Callahan; niece Blair Callahan. Memorials may be directed to the family. A memorial service will be held at 11:30 AM Friday, February 24, 2017 at Dugan Funeral Chapel.

Lee E. Callahan, 65 years-old of Fremont, Nebraska, passed away on February 18th, 2017 at his residence. Lee was born on February 9th, 1952 in Virginia Beach, VA, to Myron and Alberta (Meier) Callahan. His family moved to Fremont in 1960,... View Obituary & Service Information

The family of Lee E. Callahan created this Life Tributes page to make it easy to share your memories.

Send flowers to the Callahan family.