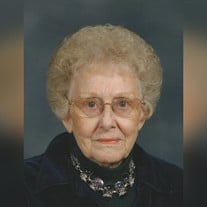 Marcella Rhea (Ranslem) Hein, 95, of Fremont, died peacefully in her home on April 4, 2017. Or, in her words, “I’m going to where the Eagles fly.” Marcella was born on January 27, 1922 to Minnie (Arps) and Ed Ranslem in Dodge County. Marcella attended District 6 Diers School and graduated from Fremont Senior High School in 1940. Marcella began her working career at Montgomery Wards in downtown Fremont before she moved to Vancouver, WA to work in the plate shop at the shipyards during World War II. On her return to Fremont she began her career at Gerald Sampter Clothier – a second home to her for 40 years before retiring. She was a member of Salem Lutheran Church where she was secretary for the women of the ELCA from 1996-1998. Marcella was also a charter member of the Fraternal Order of Eagles Auxiliary for 58 years beginning in 1959. Marcella held the offices of President, Past President, Past State Officer, Mother of the Year (twice), State Mother of the Year and Grandmother of the Year. She chaired and helped with charities, dinners, dances, auctions, bingo and many other events during her years at the Auxiliary. She also participated on the Women’s Ritual team and was very proud to tell anyone that she won “All State” for her individual parts. Marcella is survived by her five children; Sharon Schrader of Fremont, Diane House of Rocklin, CA, Robyn Buckingham of Millbrae, CA, Mark (Michele) Hein of Texas and Beth (Cecil) Bell-Hauri of Maple Grove, MN. Fifteen loving grandchildren: Naomi (Schrader) Reed-Gutz, Michele (Scott) Schrader-Rise-Wessels, Lisa House, Sara and Samuel Buckingham, Jacob, Charles and Joseph Hein, Mathew, Caleb and Zachary Bell, Jonathan, Sarah and Zach Hauri. Eight loving great grandchildren: Victoria (Reed) and Ethan Bohn, Dominic Reed, Zoe Gutz, Christian and Bailey Rise, Calvin and Cameron Wessels and, one loving great-great grandchild: Elaina (Christian Rise) Marcella is preceded in death by her husband of 60 years, Max Kenneth Hein, brother, Maynard “Bud” Ranslem; sister, Lynn Ranslem-Hoffman; parents Minnie and Ed Ranslem; parents-in-law Marcus and Anna Hein; son-in-law’s, Keith Buckingham and Roger Schrader. Marcella lived with a depth of kindness and hospitality beyond measure. She believed in “showing up” – whether to work, help at the Eagle’s Club, or to be at the side of each of her children as they had children or moved or lost their spouse. She will be dearly missed. A memorial service and celebration will be held Saturday, May 6, 2017 at 1:00PM at Salem Lutheran Church. Marcella’s last wish was for us to celebrate her life with family, friends and laughter. She requested everyone eat chocolate in her name and, if you so wish to make a memorial contribution in her name, these were her suggestions: Salem Lutheran Church, 401 E. Military, Fremont, NE ; Fraternal Order of Eagles Auxiliary 649 N, Main Fremont, NE or Hospice of your choice.

The family of Marcella R. Hein created this Life Tributes page to make it easy to share your memories.