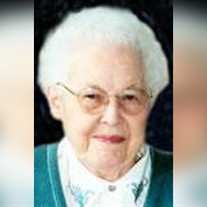 Marian Engdahl McCluskey Obituary Marian Engdahl McCluskey, 93, was born February 18, 1912 in Oakland, Nebraska, and died January 21, 2006 at Nye Pointe in Fremont. Marian graduated from Oakland Public School in 1928 and stayed in education for another 40 years. She inauguarated her long career in single room school houses beginning the days with stoking a wood-burning stove. She taught in the Oakland Public School system for 20 years. Marian is known by many northeastern Nebraskans as their teacher. She was issued a lifetime teaching certificate from Wayne State College, Wayne, Nebraska in l930. Marian married Aloysius Paul McCluskey of Newcastle, Nebraska June 4, l940 in Sioux City, Iowa at the Cathedral of the Epiphany. "Mac" was an auditor for the Holmquist Grain and Lumber Company. He died in April of l969. They made their home in Lyons, Nebraska and together they raised four children: Paul, an executive editor of Harcourt Brace Jovanovich Publishing, died in Orlando, Florida in 1990. David, now a retired special agent for the Internal Revenue Service, and his wife Kathy, have resided in Tempe, Arizona for nearly 40 years. Patrick and his wife, Linda, both career educators, have resided in Richmond, California similarly as long. Mary, former curator of the Louis E. May Museum and her husband, Jerry Hendrickson, have spent their entire married lives in Fremont. In l977 Marian retired and moved to Fremont. She continued to teach another 5 years as a substitute at Clarmar School. The Clarmar Parent Teacher Association named her a life-time member of their organization. She was also awarded the "Friend to Education" certificate. She was a member of St. Patricks Catholic Church, St. Joan of Arc Circle, serving for a number of years as president, and a past member of Chapter GH, PEO, Fremont Retired Teachers, Delta Kappa Gamma, Fremont Area Medical Center Auxiliary, and the Dodge County Historical Society. In all seasons she was a woman of prayer. She fielded the prayerful pleas of her family and friends and voiced her own nearly every day of her life. She resided at Nye Pointe for the past three years. Besides her three chidren she is survived by seven grandchildren and eight great- grandchildren: Dr. Peter M.McCluskey and his wife Jenny, Calvin and Annie of Murfreesboro, Tennessee; Brian and Karina McCluskey, Brian, Baylee and Brooklyn of Chandler, Arizona; Michael McCluskey of Tempe, Arizona; Erin McCluskey of Brooklyn, New York; Dr. Ryan C. Hendrickson and his wife Terese, Marguerite Mary, Frances Anne, and Ryan Warren of Champaign, Illinois; Rev. Mr. Daniel S. Hendrickson, S.J. of Berkeley, California; and D. Scott Hendrickson, S.J. of Madrid, Spain. A sister, Elaine Nelson and a brother, Alden Engdahl and his wife Ila, all of Oakland, also survive, as well as several nieces and nephews. Marian was the sole surviving member of Mac's family of eight siblings and their spouses. A memorial service will be held Saturday, January 28th, at 11:00 AM at St. Patricks Catholic Church in Fremont celebrated by Bishop William Dendinger of Grand Island and Deacon Daniel Hendrickson. There will be a private family burial in the Lyons Nebraska Cemetery. In lieu of flowers the family suggests memorials to the scholarship fund of the Fremont Area Association of Retired School Personnel

The family of Marian J. McCluskey created this Life Tributes page to make it easy to share your memories.

Send flowers to the McCluskey family.