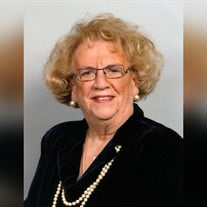 Marjorie Jane (Peterson) Boyer, 84, of Fremont passed away Thursday, June 16, 2016, at Nye Legacy surrounded by family. Marjorie Jane Smith was born at home on Sept. 18, 1931, in California Junction, Iowa, to Lois and James F. Smith. She was the oldest of four girls. Her sisters often accused her of being “Daddy’s Favorite.” She graduated from Blair High School in 1949. She was a member of the Purple Peppers Cheerleading Squad. In November of 1949, she married her high school sweetheart, Donald E. Peterson. They settled in Fremont, where Marge and Don started their family. They had three children: Steven Peterson, Jeffrey Peterson and Amy (Peterson) Havekost. Don was a real estate developer and contractor. With a natural talent in interior decorating, Marge would help Don by decorating spec homes. The family had an interest in raising quarter horses and it was not uncommon for Marge to hook up the horse trailer and take Steven to horse shows when Don was not available. As a family they traveled throughout the Midwest to these events during the ’60s. In 1974, Don fulfilled his promise to Marge to build her a dream house with a country kitchen. This home has been the center of all family activities and Marge was known for her hospitality. The most cherished were the 4th of July celebrations which included friends and family and of course Christmas which brought family home from near and far. Her husband Don was killed tragically in a plane crash in 1979. Following his death Marge went to work at Interiors by Joan until her retirement in 2007. In 1982, she married Robert Boyer and added another daughter, Jill (Boyer) Scott, to the family. Marge and Bob traveled and loved to go dancing at the Eagles Club. Unfortunately, Bob passed away in 1988. In addition to work, Marge enjoyed Birthday Club, Bible Studies and various church activities. She opened her home at Lake Ventura for many years of “Fun in the Sun” events that her son Steven planned as a pastor. Marge loved life, working in her yard, shopping, cooking, shopping, playing bridge, shopping, gift giving and entertaining. Did we mention shopping!? Her baked beans and potato salad will particularly be missed by her family. Marge was preceded in death by her parents, Lois and James Smith; her husbands, Donald E. Peterson and Robert Boyer; sisters, Alice Schenzel and Barbara Biel; and nephew and niece, Ty and Terri Schenzel. She is survived by sons, Steven (Mindy) Peterson of Omaha, and Jeffrey (Shelly) Peterson of Fremont; daughter, Amy (Scott) Havekost of Franklin, Ind.; stepdaughter, Jill (Richard) Scott of Austin, Texas; 16 grandchildren; 20 great-grandchildren with three on the way; Sister Joan Klein of Prescott, Ariz.; and dear family friends, John and Gloria Weir of Fremont, Shelley Meyer of Fremont and Linda Vice of Omaha; as well as many other friends and family. A memorial service will take place at 11 a.m. Friday, July 1, at Christian Missionary Alliance Church in Fremont. Steven Peterson will be officiating. Visitation will be from 4-8 p.m. Thursday, June 30, at Dugan Funeral Chapel in Fremont. The family will be present from 6-8 p.m. There will be a private family burial at Memorial Cemetery in Fremont. Memorials may be directed to Fresh Start for All Nations, an international ministry established by Marge’s son, Steven.

The family of Marjorie J Boyer created this Life Tributes page to make it easy to share your memories.

Send flowers to the Boyer family.