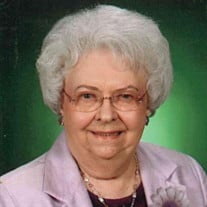 Marletta J. Warner, age 95, of Fremont, passed away Wednesday, June 2, 2021, at Dunklau Gardens. Marletta was born at Alamota, Kansas, on February 24, 1926. She moved with her family, as a little girl, to Gering, Nebraska. Marletta attended Gering Public Schools where she graduated in 1942. After graduation, she met her late husband, Keith Warner of Harrisburg. They were married on August 27, 1944. They had two sons, Dennis and Randall. Marletta was an active member of First United Methodist Church, where she held local, district and Nebraska Conference leadership positions. She was also involved with Eastern Star, Nebraska Cowbells Association, American Red Cross as well as many other boards and committees. Marletta spent 38 years with her late husband Keith, as a wheat farmer and cattle rancher in Banner County. They moved to Fremont, in 2010. Marletta was proceeded in death by her husband Keith, parents John and Amelia Neiman, brother Robert Neiman, sister Leona Knaub. She is survived by her sons Dennis (Janet) Warner of Arlington, Randall (Paula) Warner of Ord, grandchildren Tori (Andrew) Roth of Kansas City, MO, Tessa Warner of Lincoln, Russell Warner of Ainsworth, Autumn Kowalski of Kearney, Anne Terry of St. Louis, MO, 5 great-grandchildren and many other family and friends. Memorials may be directed to the First United Methodist Church in Fremont. Condolences may be left at www.duganchapel.com Private family services are being held. Burial will take place July 1, 2021, at 10:30AM at the Pleasant Hill Cemetery, in Hull Community, Banner County.

Marletta J. Warner, age 95, of Fremont, passed away Wednesday, June 2, 2021, at Dunklau Gardens. Marletta was born at Alamota, Kansas, on February 24, 1926. She moved with her family, as a little girl, to Gering, Nebraska. Marletta attended... View Obituary & Service Information

The family of Marletta J. Warner created this Life Tributes page to make it easy to share your memories.

Send flowers to the Warner family.