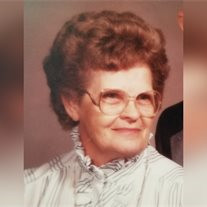 Maxine E. (Carlson) Ibsen, 96, passed away peacefully at Nye Legacy Friday, September 6. She was born on June 19, 1923 on a small farm east of Lyons, NE, the fourth of five children of Boyda and Agnes (Englebright) Carlson. She helped her parents manage the farm through the Depression, and graduated from high school in Lyons in 1941. After leaving to find a job in Fremont, her parents had to stop farming and moved into Fremont as well so she could take care of them, which she did until they died. Maxine Carlson married J. Gordon Ibsen June 4, 1960 in Fremont. He had two teenage daughters from a previous marriage, who ended up calling her Mom. When the girls left home for college or marriage, Maxine and Gordon settled in to a life of factory work at Campbell's Soup, from which they both retired fairly young, but continued to work. One of Gordon's daughters, Judy (Bob) Wesely passed away in 1988, Gordon passed away in 2001, and over the years all of both their siblings passed, and several treasured nieces and nephews. Maxine lived on, finally selling her home in 2016 and moving into Nye Square. At the end of that year, Maxine had a stroke which led her to a year in nursing care, then back to Nye Square for another 18 months including her 96th birthday, for which niece Marge and husband Arnold Lessig organized a wonderful party. Maxine is survived by daughter Doni (Ray) Lacey of Canon City, CO, three grandchildren, Todd (Myra) Lacey, Amber (Rod) Eichorn, and Scott Wesely, many nieces including her special niece Marlene, nephews, other relations and friends who all loved Maxine and were so happy she lived such an extraordinary long life. Her kindness and caring will be deeply missed. A “Celebration of Life” picnic will be held at Davenport Park in Fremont Friday, September 20 at 10:30 a.m., followed by burial in Ridge Cemetery. Memorial donations may be given to Low Income Ministries of Fremont, where Maxine volunteered for many years. Condolences may be left at www.duganchapel.com.

Maxine E. (Carlson) Ibsen, 96, passed away peacefully at Nye Legacy Friday, September 6. She was born on June 19, 1923 on a small farm east of Lyons, NE, the fourth of five children of Boyda and Agnes (Englebright) Carlson. She helped her... View Obituary & Service Information

The family of Maxine Edith Ibsen created this Life Tributes page to make it easy to share your memories.

Send flowers to the Ibsen family.