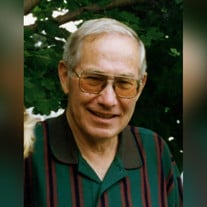 Michael L. Wray, age 85, of Fremont, passed away Tuesday, July 3, 2018 at the Norfolk Veterans Home. Michael was born in Hamburg, Iowa on October 25, 1932 to Marguerite Gude Wray and Frank Wray. He arrived home to meet his 2 year old sister and lifelong friend, Sally. He was soon nicknamed Mickey and continued to answer to Mickey, Mick or Mike the rest of his life. He enjoyed his childhood with a large extended family and a family unit that grew to include one brother and two younger sisters. He loved fishing the Nishnabotna River, hiking the Loess Hills and riding his bike around town with his baseball glove on the handle bars, always looking for a pickup game of baseball. He recalled being at Boy Scout camp when the 2nd World War ended and was disappointed that he missed the parade in Hamburg. Just before his senior year, the family moved to Atlantic, Iowa where he graduated high school in 1950. He worked for his dad for a time before enlisting in the U.S. Navy, reporting for boot camp at Great Lakes in January 1951. Following boot camp and welding school, he was assigned to the USS Henrico a troop ship stationed in San Diego. Following his discharge, he enrolled at the University of Nebraska, using the G.I. Bill and his welding skills to finance his education, graduating with a B.S. in Business Administration. For fifty years he attended all home football games and remained a Big Red fan until the end. He spent most of his career in the Ag Chemical industry in the Omaha and Fremont areas. He made numerous friends throughout the years, most notably his Hamburg friend Larry West and wife Martha of Papillion. He married Laura Larson in Omaha in 1964 and they were blessed with two beautiful daughters, Angela Jane and Kathleen Ann. He lived an active life until being diagnosed with Parkinson's Disease. The last two years of his life were spent at the Veterans Home in Norfolk, NE where he was cared for with skill and grace. A huge thank you to the entire staff. He is survived by his wife of 53 years, daughters and their husbands Angie and Bryan McKenzie of rural Fremont, and Katie and Andrew Jurs of Ames, Iowa and very special grandchildren Levi Wray, Kelci Martens, Clara Jurs and Milo Jurs. He is also survived by his sister Sally, husband Bill Guth of Torrington, Wyoming and their family, his brother L. Patrick Wray, wife Katie of Lake Manawa, Iowa and their family, sister Rosemary, husband Dale Wilhelm of Iowa City and their family, and many cousins and in-laws. He was preceded in death by his parents, sister Angela Marie Wray, favorite uncle Jerry Gude, nephew Mike Guth and a host of friends and relatives. Condolences may be left at www.duganchapel.com Visitation will be held Friday, July 6, 2018 from 4-6PM at Dugan Funeral Chapel. Memorial service will be Saturday July, 7, 2018 at Sinai Lutheran Church at 11AM. Inurnment will be held at Omaha National Cemetery at a later date. Memorials may be directed to the Fremont Area Community Foundation or The YMCA.

The family of Michael L. Wray created this Life Tributes page to make it easy to share your memories.

Send flowers to the Wray family.