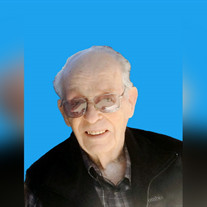 Philip John Johnson, age 92, of Fremont, went to be with the Lord, Wednesday, November 2, 2016, at the Saunders Medical Center in Wahoo, Nebraska. Philip was born February 18, 1924 to Philip 'Dewey' and Lillian (Soder) Johnson in Mead, Nebraska. He attended and graduated from Mead High School in 1942. Following high school, he was drafted into the Navy. He was sent to Radio Service Training in Moscow, Idaho, where he earned a 3rd class rank. He then moved on to Bainbridge Island, Washington, to further his education in Radio Intelligence school. Following school in Washington, he was assigned to Pearl Harbor. While stationed at Pearl Harbor he earned his 2nd Class rating, all while serving as a Navy Radio Intelligence officer deciphering Japanese code. Following the end of World War II, Philip returned to the family farm at Mead, Nebraska, where he raised crops and started a Grade A dairy. Five years later he married Donna Huntley of Alliance, Ohio, on June 18, 1950. To this union, four children were born. He was a member of the Colon V.F.W., was a 4-H leader of the Marietta Dairy Hustlers for 35 years, and was recognized as the Aksarben Farm Family in 1971. He also served on District 57’s School Board and the Pohocco Precinct Board. From FFA he received his Honorary State and Honorary American Farmer Degrees. He is survived by his wife, Donna, a son Philip (Shirley) Johnson of Eaton, CO; daughters Darlene (Steve) Carritt of Milford, NE and Melinda (Larry) Rasmussen of Mead, NE; and a son John (Dotty) Johnson of Greeley, CO; a sister, Phyllis Ackley of Union, NE, sister-in-law Janice Wallingford of Lincoln, NE, sister-in-law Judy Honeycutt of Alliance, Ohio, 15 grandchildren, 28 great-grandchildren. Philip will be remembered most for his service to his country, passion for dairy farming and love of his family and faith. Condolences may be left at www.duganchapel.com Memorials may be directed to St. Croix Hospice and or The American Legion Post 265 of Colon. Visitation will be held Tuesday, November 8, 2016 from 4:00 - 8:00 PM with family present from 6:00 - 8:00 PM at Dugan Funeral Chapel. Funeral Services will be held Wednesday, November 9, 2016 at 10:30 AM at Fremont Evangelical Free Church.

Philip John Johnson, age 92, of Fremont, went to be with the Lord, Wednesday, November 2, 2016, at the Saunders Medical Center in Wahoo, Nebraska. Philip was born February 18, 1924 to Philip 'Dewey' and Lillian (Soder) Johnson in Mead, Nebraska.... View Obituary & Service Information

The family of Philip J Johnson created this Life Tributes page to make it easy to share your memories.

Send flowers to the Johnson family.