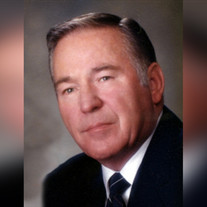 Raymond “Ray” James Mitchell, age 96, passed away Wednesday, January 9, 2019, at Nye Legacy. Ray was born to Robert and Aletha Mitchell on October 21, 1922, in Grandview, Washington. He enlisted in the Army Air Corp when he was 20 years old and served from 1942-1945. He was a POW for 1 year in Germany. Ray Mitchell married Delma Ernst in Denver on December 8, 1945. Ray retired as a foreman from Hormel’s in 1977 after 30 years of employment. Ray was a longtime member of the Fremont Golf Club, and enjoyed hunting, fishing, and playing pool, but his love was the game of golf. Ray and Delma lived in Fremont most of their lives. One of their greatest joys was spending time with the many friends they had in Fremont. Preceded in death by his parents, wife of 64 years Delma, two brothers, and one sister. Survived by: Daughters Marcia Mitchell of Omaha, Donna (Gregg) Mitchell of Omaha. Son Monte Mitchell of Woodland Park, Colorado Grandchildren: Molly (Scott) Slater, Kimberly (Aaron) Broweleit, Kylie Mitchell, Mackenzie Mitchell Great Grandchildren Liam and Sidney Slater Many other nieces, nephews, family and friends. Memorials have been established to the Ray Mitchell Golf Scholarship (c/o Fremont Area Community Foundation, 1005 E. 23rd St., Suite 2, Fremont, NE, 68025) and Trinity Lutheran Church. Visitation: 3:00 - 7:00 PM on Sunday, January 13, 2019, at Dugan Funeral Chapel. Funeral Services: 10:30 AM on Monday, January 14, 2019, at Trinity Lutheran Church. Pastor Dan Heuer will be officiating. Interment: Memorial Cemetery

The family of Raymond J. Mitchell created this Life Tributes page to make it easy to share your memories.

Send flowers to the Mitchell family.