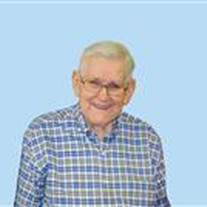 Raymond Nielsen age 88, died Saturday February 11, 2012, at the Hooper Care Center. He was born March 20, 1923, in Ashland, NE, to Frands and Anna (Nielsen) Nielsen. He was the youngest of 10 Children. The family moved to Ashland from their home near Hooper, NE in Dodge County around 1918. The farm was paid for, but they needed more land for the boys to farm, so they bought a farm in Ashland. The family joined the Methodist Church in Ashland, because there were no English speaking Lutheran Church’s in the area. With the family's strong Christian foundation, it later lead to two brothers becoming Methodist Pastors. Unfortunately the Depression came and they lost the farm, but their faith stood firm. The family moved on to Iowa to a town called California Junction, near Missouri Valley, where they continued to rent land and farm. They moved on to other Iowa towns ending up in Onawa, Iowa, where he graduated High School in 1942. His parents bought a farm in Tekamah, NE, and Raymond continued farming with them. Due to his parents being older, he was deferred from Military service, to help keep the farm going, doing his part on the home front. From 1945-1946 he attended Dana College.They attended the Methodist Church, where Raymond began what would become a lifetime love of teaching Sunday School and sharing God’s Word. Frands died in 1953 and Raymond stayed on the farm with his mother. He met his wife Edith Pauline Martin in Tekamah, and they married January 24th, 1954, at First Baptist Church. Raymond continued to farm and two of his children were born when they lived there. They decided to sell the farm and his mother moved to Onawa to live with her oldest son Lambert. Raymond and family moved to a farm house north of Fremont and he started working at Campbell Soup Company. Two more children were born. When they moved into town, The Salvation Army Church was only one house away. This made it easy to make this their new church home. Their family grew to 7 children and a busy life.  The family all had paper routes and Raymond and Pauline, delivered Fremont Tribune newspaper bundles to the carriers.When the boys were younger, Raymond was a baseball coach and the whole family loved the game. Even with a big family, there were good family vacations and pictures to remember.Raymond retired from Campbell Soup in 1988, and in the same year unfortunately had a car accident and suffered the loss of his wife and brother.With retirement he was able to travel and visit his brother in Texas several times and fly to see his grandkids, which he loved very much to do. He was such a good grandpa and would do anything the kids asked. Seeing him read to them, created wonderful memories. Raymond lived at Pathfinder House assisted living for 4 1/2 years before moving to Hooper in February of 2011. He was very content reading his Bible and singing Hymns from his favorite song book. Singing and his friendly smile will be something he will be remembered for.Raymond had a love of reading and learning. He was a go-to person for all kinds of knowledge. He always had a big vegetable garden and loved sharing the produce. He was a regular walker at the YMCA, and enjoyed the company of people around him. He never knew a stranger. He could visit with anyone and always had a smile. He was a member of The Salvation Army Church and with his years of teaching as a young man until he retired at age 85, he gave Glory to God with his teaching for 50 years. He was on the church council and was a Corps treasurer for awhile. He went to Bible studies and was willing to do whatever was needed. He was a member of the Golden K Kiwanis and remained active even when he couldn’t drive anymore. He also enjoyed going to the Fremont Friendship center and the music and friendship they offered, again being able to enjoy his time with everyone with the assistance of people who shared the same philosophy of helping others. He was on the Senior Center Board for several years. He did meals on wheels and Car-Go through ENOA, helping people to get around to appointments and getting groceries. On Wednesdays he would leave the Senior Center and they would drop him off to bowl at Plaza Lanes. He would look forward to those days very much. Many people went above and beyond to enable him to continue to enjoy things he loved, which is most of all being with people and visiting.Raymond is preceded in death by his wife Pauline, 2 great grand-daughters Madison Foell and Hailey Foell, one great-grandson and 9 brothers and sisters.Survived by:Sister-In-Law: Dorah Nielsen of Janesville, WISons: David (Debbie) Nielsen of Fremont; Eric (Lisa) Nielsen of Pleasant Grove, AL; Carl Nielsen of Cincinnatti, OH; and Michael (Monica) Nielsen stationed in GermanyDaughters: Charlotte (Ron) Young of Fremont; Anne (Richard) Radcliff of Marysville, WA; Mary (Michael) Thomas of Monroe, MIGrandchildren:Kim (Nick) Foell of Storm Lake, IA; Tammy Nielsen of Omaha; Scott Nielsen of Fremont, NE; Vicki Nielsen of Fremont; Sarah Young of Fremont; Natalie (Joe) Mitchell of Hawaii; Vincent (Lori) Swallow of Omaha; Lewis Radcliff of WI; Christopher, Kaylie, Kerri, and Kyle Thomas of Monroe, MI; Nicklas Nielsen and Gregory Nielsen of Germany.Great-Grandchildren:Amber Gies of Hawaii; Paul Foell of Storm Lake, IA; Suggested Memorials to The Salvation ArmyVisitation: A visitation will be held from 3:00 to 8:00 PM Wednesday, February 15, 2012, at Dugan Funeral Chapel with family present from 6:00 to 8:00 PM.Funeral Services: A funeral will be held at 10:00 AM Thursday, February 16, 2012, at First Lutheran Church in Fremont. Pastor Charlie Axness and Major Marc Johnson from The Salvation Army will be officiating.Burial will be at Bluffs Trinity Cemetery near Fremont

Raymond Nielsen age 88, died Saturday February 11, 2012, at the Hooper Care Center. He was born March 20, 1923, in Ashland, NE, to Frands and Anna (Nielsen) Nielsen. He was the youngest of 10 Children. The family moved to Ashland from their... View Obituary & Service Information

The family of Raymond Nielsen created this Life Tributes page to make it easy to share your memories.

Send flowers to the Nielsen family.