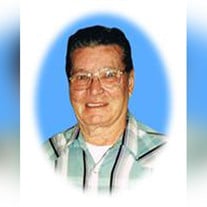 Rex Walter Watts born October 7, 1928 to Walter & Florence (Mentink) Watts in Shelby, NE  and passed away at the age of 84 on December 16, 2012 in Bolivar, Missouri.   Rex married Elizabeth (Betty) Gable in 1950 and they had eight children.... View Obituary & Service Information

The family of Rex Walter Watts created this Life Tributes page to make it easy to share your memories.

Send flowers to the Watts family.