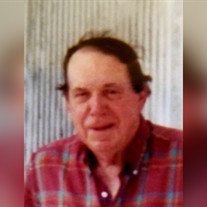 Richard G. Okey, age 85 of Schuyler, NE died peacefully Friday, April 13, 2018 at Dunklau Gardens in Fremont, NE. Richard was born 9 August 1932 in Cassville, WI to J. and Martha Okey. One of six children, he graduate from Cassville High School. Richard served in the U.S. Army during the Korean War. After returning from Korea in 1955, Richard attended Iowa State University graduating in 1962 earning the degree of Doctor of Veterinary Medicine and the nickname “Doc.” During college, he interned at a Veterinarian clinic in Winside, NE. He must have liked Nebraska because following graduation, Dr. Okey moved to and purchased a Veterinary practice in Schuyler, NE. He practiced for 54 years. A lover of baseball, for many years he managed the Schuyler Merchant baseball team. An amateur historian, Richard would often tell stories of the railroad’s expansion West and the Lewis and Clark expedition. He enjoyed Nebraska college sports, dancing, gardening, managing his farm, and especially his apple orchard. He often said, “There is no better place on Earth then Colfax County.” Richard is survived by his son, Hal Okey, daughter-in-law Laura and their two children, Christian and Luke. He is also survived by his sisters Margret Dalthorp of Sioux Falls, SD; Virginia Rauch of Cedar Rapids, IA; and his brother, James Okey of Athens, GA. Though divorced, he remained friends with and is also survived by Linda Okey of Plattsmouth, NE. Per his wishes, his cremated remains will be spread on his beloved apple orchard by his family. Condolences may be left at www.duganchapel.com

The family of Richard G. Okey created this Life Tributes page to make it easy to share your memories.

Send flowers to the Okey family.