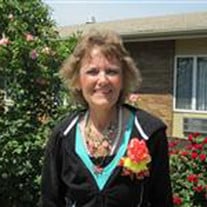 Shirley A. Kothenbeutel, age 61, passed away Thursday, January 31, 2013, at Golden Living Center in Valley, NE. Shirley was born on August 14, 1951, to Dean and Doris Christensen in Fremont, Nebraska. She graduated from Fremont High School in 1969. After graduating, she married and had two children; daughter Jamie Chapman and son Chad Lovald. She spent the majority of her life in Nebraska, and Florida. In 1993 she married Ben Kothenbeutel of Fremont, NE. They lived together in Hooper & Stuart, NE. Her life was focused around her love toward God, her husband, children, family and friends. She enjoyed playing tennis, cooking, and water or lakeside activities. Her lovely smile reflected her kind heart, her Godly attitude, and her deep appreciation for the many blessings she received throughout her life. All who knew and loved her were inspired by her amazing strength and perseverance. Survived by: Parents Dean & Doris Christensen of Hooper, NE Husband Ben Kothenbeutel of Fremont, NE Daughter Jamie (Bob) Chapman of Boynton Beach, FL Son Chad Lovald of Fort Lauderdale, FL Sister LaVonne (Tom) Ryan of Waterloo, NE Sister Diane (Tom) Wagner of Hooper, NE Brother Dan (Cindy) Christensen of Austin, TX Grandsons: Riley & Reece Chapman of Boynton Beach, FL Nieces & Nephews: Rich (Jennifer) Dorfmeyer of Omaha, NE Sean Ryan of Omaha, NE Shannon Ryan of Omaha, NE Kelly (Andrew) Jackson of Omaha, NE Kris (Becky) Wagner of Gretna, NE Peter (Pam) Christensen of RoundRock, TX Carrie (Ryan) Jackson of RoundRock, TX A memorial has been established by the family to be determined at a later time. A memorial service will be held at 10:30 AM Thursday, February 7, 2013, at Living Word Church in Fremont. Dugan Funeral Chapel is in charge of the arrangements. Inurnment will be held at a later date at the Hooper Cemetery.

The family of Shirley A. Kothenbeutel created this Life Tributes page to make it easy to share your memories.

Send flowers to the Kothenbeutel family.