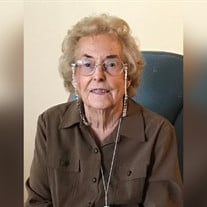 Shirley J. Macrander, age 92, of Fremont died on Saturday, February 3, 2018 at Shalimar Gardens. Shirley was born March 12, 1925 in Ervin, S.D. to Cora M. (Schanck) and Martin M. Johannesen. After graduation from Erwin High School Shirley went to work for the Civil Service at the Sioux Falls Army Air base as a payroll clerk from 1943 to 1945. Later for the State of Nebraska for the G.I. Bill of Rights on the job training office in North Platte, Nebraska, and the Bowen Accounting firm in North Platte. She then worked at Walter Witthoff & Co. (now known as Erickson & Brooks CPAs) in Fremont, Nebraska for over fifty years. Shirley married Ivan E. Crist in 1945 and Melvin H. Macrander on August 29, 1969. Shirley and Melvin spent much of their married life fishing in the U.S. and Canada and spending vacations for 40 years in Mexico. After retiring they wintered in Mexico, making many new friends along the way. Survivors include stepsons, Michael Macrander (Sharon) of Murray and Marty Macrander (Diane) of Union and stepdaughter Cindy Wohlfarth (Alan) of Plattsmouth; grandchildren, Angela Hogue (Bobby), Timothy Macrander (Amy), Alison Burns (Matt), Maquel Schippert (Andrew), Chaz Macrander (Kelly), Ashley Macrander; great grandchildren, Dawson and Isabella Hogue, Axel and Greta Schippert, Liliana and Logan Burns, Cash and Drake Macrander and Emily and Luke Macrander. Shirley is also survived by sister Joyce Hamilton, sisters-in-law Pat Macrander and Martha Macrander, and many nieces and nephews. She was preceded in death by her parents; husband Melvin; former husband Ivan E. Crist; sisters, Dorothy Wittrock, Emaline Kusman, Catherine Currier and five brothers-in-law. She was a member of the First Congregational Church UCC of Fremont for over fifty years. Memorials may be directed to the First Congregational Church or charity of your choice. Memorial service will be held Tuesday, February 13, 2018, at Dugan Funeral Chapel. Dugan Funeral Chapel is in charge of arrangements. Condolences may be sent to www.duganchapel.com. There will be no burial at this time as she has given her body to science.

The family of Shirley J. Macrander created this Life Tributes page to make it easy to share your memories.

Send flowers to the Macrander family.