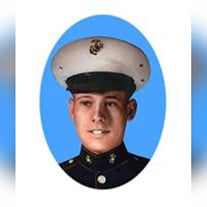 Stanley J. Jonas of Omaha, age 81, passed away Monday June 16, 2014 at Golden Living Center in Omaha. Stanley was born in Columbus, Nebraska, on March 6, 1933, to Stanley and Margaret Jonas. He graduated from Schuyler High School in 1950 and worked on the family dairy farm. In 1953, Stanley joined the Marine Corps and served as a Sergeant during the Korean War. After completing his tour, he returned stateside where he met and married Linda Chessher in Oceanside, California, on February 29, 1956, at which time they moved to the family farm outside of Schuyler. He also briefly worked on an oil rig in Colorado and as a truck driver in Texas. In 1970 they moved to Schuyler and Stanley worked at the Schuyler Meat Packing Plant until 1990. He began working as a custodian for Schuyler Public Schools until his retirement in 2000. Stanley and Linda moved to Omaha in 2001 to be closer to family. He always enjoyed exercise and jogging, drama or war movies, and relaxing by drinking a beer in the evening. He was a big college football fan and loved to spend his Saturdays watching games. He was a member of the American Legion. Preceded in death by his parents Stanley and Margaret, son Vincent, sister Kay Trofholz Survived by: wife Linda of Omaha son James (Bridget) Jonas of Omaha daughter Jennifer (Ed) Kaminsky of Seattle brother Del Jonas of Omaha sister Trudy (Gene) Kmoch of Grand Island Grandchildren: Joshua, Jeremy, Jessica, Nomindari, Anudari, Daniel Nieces and Nephews Please visit www.duganchapel.com to leave an online condolence. A graveside service will be held at Pleasant View Cemetery in Leshara on Friday, June 20, 2014 at 11:00 A.M.

Stanley J. Jonas of Omaha, age 81, passed away Monday June 16, 2014 at Golden Living Center in Omaha. Stanley was born in Columbus, Nebraska, on March 6, 1933, to Stanley and Margaret Jonas. He graduated from Schuyler High School in 1950... View Obituary & Service Information

The family of Stanley J. Jonas created this Life Tributes page to make it easy to share your memories.

Send flowers to the Jonas family.