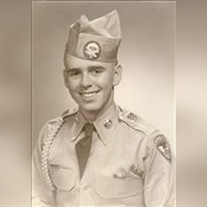 Ted Walkenhorst Ted F Walkenhorst, age 73, of Arlington, went to his heavenly home on March 11, 2009. Ted was born in Arlington on Feb 26, 1936. He was confirmed at Saint Paul's Lutheran Church in 1949, and graduated from Arlington High School in 1953. After graduating, Ted joined the Army and served his country during the Korean War. On November 24th, 1957, Ted married Patsy Jean (Hansen) at St. Paul’s Church in Arlington, NE. They were blessed with 51 years of marriage. For 42 years, Ted dedicated service to his country as a warrant officer with the US Army Reserve, 809th Battalion stationed in Fremont, NE. Ted lived life to the fullest, and filled his time with his greatest loves: family and church. He was dedicated to St. Paul’s Lutheran Church, and served on several committees there. Ted was happiest when he was fishing with his grandchildren, helping his children with various projects, woodworking, farming, and spending time with all family members and his beloved wife. Ted was a wonderful father, and will be missed dearly by his four children. Ted is survived by his wife, four children and their spouses; Mark (Jean) Walkenhorst, Pam (Jay) Kock, Dan (Danice) Walkenhorst and Tim (Amy) Walkenhorst. He is also survived by his sister Fern Wolf and brother Roy Walkenhorst (Jeri). Nine grandchildren (and one great grandchild) include: Shannon, Jennifer, Lexus, and Ashley Kock; Josh and Zach Walkenhorst; Luke, Landon, Evie Walkenhorst, and Millie Walkenhorst.   Ted is preceded in death by his parents; Lawrence and Freida Walkenhorst, and his brother Waldo Walkenhorst. Memorials can be made to St. Paul's Lutheran School in Arlington, NE and the St. Jude's Cancer Center in Memphis, TN. Funeral services will be held on Monday, March 16 at St. Paul’s Lutheran Church in Arlington, NE at 10:30 a.m.  Visitation will be held at Dugan Funeral Home on Sunday, March 15 from 4-8 p.m. Family members will receive guests from 6-8pm.

Ted Walkenhorst Ted F Walkenhorst, age 73, of Arlington, went to his heavenly home on March 11, 2009. Ted was born in Arlington on Feb 26, 1936. He was confirmed at Saint Paul's Lutheran Church in 1949, and graduated from Arlington High... View Obituary & Service Information

The family of Ted Walkenhorst created this Life Tributes page to make it easy to share your memories.

Send flowers to the Walkenhorst family.