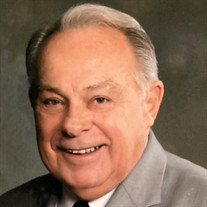 Theodore (Ted) William Schmidt, 89 year of age, passed away December 21, 2021, in Fremont. He was born on June 12, 1932 in Fremont Nebraska to Norman and Adeline Schmidt. He is preceded in death by his parents. Ted was raised in Fremont. He graduated from Fremont Senior High in 1950. Shortly after graduating high school he became a letter carrier while attending Midland College and received a Bachelor of Science degree. He went on to attend the University of Nebraska‐Lincoln and obtained a master’s degree in education. On August 18, 1964, he married Gladys his loving wife of 57 years. They had one son, Tyler. Ted began teaching math and chemistry at Arlington High School in 1963. He became principal of the Elementary and Senior High School in 1964 and continued teaching classes. He truly loved to teach. In 1982 he rejoined the postal service for another 10 years and then retired. During his childhood, Ted learned the trumpet and took after his father. He kept playing trumpet for many years. He really enjoyed playing with the Civil War Reenactors Band and the North Bend Community Band. Ted loved to be with people and help them. He spent 18 years as a hospice volunteer. He enjoyed going to coffee, being with family, cooking, fishing, spending time on the river, growing fruit trees, going to Husker games with his wife, traveling and searching for minerals and rocks. He was a member of the Fremont Alliance Church. Ted is survived by his wife, Gladys, his son Tyler, brother Steve (Dee) Schmidt and sister Norma Jeanne The family suggests memorials be given to the Fremont Alliance Church. Visitation will be held Monday, December 27, 2021, at Dugan Funeral Chapel from 5-7 PM. Funeral Service will be held Tuesday, December 28, 2021, at 11:00 AM at Fremont Alliance Church. Condolences may be left at www.duganchapel.com Dugan Funeral Chapel 402-721-2880

Theodore (Ted) William Schmidt, 89 year of age, passed away December 21, 2021, in Fremont. He was born on June 12, 1932 in Fremont Nebraska to Norman and Adeline Schmidt. He is preceded in death by his parents. Ted was raised in Fremont.... View Obituary & Service Information

The family of Theodore William Schmidt created this Life Tributes page to make it easy to share your memories.

Send flowers to the Schmidt family.