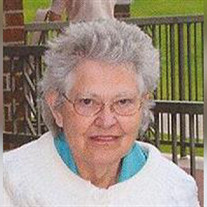 Twila M. Bogner, 83, of Fremont, died Monday April 25, 2011 at her residence.  She was born to Ernest and Susan (Wagner) Boggs on July 7, 1927, in Continental, OH.  She attended grade school in Continental until the 10th grade and then went to a Boarding Bible School in Owassa, MI.  After graduation, she attended college in Bowling Green, OH, where she received her teaching certificate after 2 years.  She began teaching 2nd grade in Attica, OH for 2 years and went back to school to obtain her bachelor’s degree.  While in her first year of teaching, she met the love of her life, Carl Wendell Bogner.  She graduated with her bachelor’s degree on June 9, 1950 and 4 days later she married Carl in Belmore, OH. To this union was born Carl Wesley and Carla Faye Bogner Krula.  Twila received her Master’s Degree from University of Nebraska at Omaha in June of 1968.  She loved teaching school and had a great passion for her students.  She taught in school districts in 6 states: Ohio, Indiana, Oklahoma, Colorado, Nebraska and Missouri.  She retired from teaching in May of 1989. Twila’s other interests included studying God’s word and talking to others of her great love of Jesus.  As a family, Carl and Twila enjoyed camping, fishing, gardening and reading.  She loved her grandchildren and rarely missed a game or event that they were in.  She also enjoyed traveling; some of her favorite trips were to Alaska, Florida and to Hawaii to spend time with Wes.  She was very much the peace maker and family oriented woman.  She was able to attend he granddaughter Alecia’s wedding last May. Twila will be greatly missed and survived by her husband, Carl Wendell Bogner; son, Carl Wesley Bogner of Jasper, OR; daughter, Carla (Gary) Krula of rural Rogers; 4 grandchildren, Joseph Krula of Grand Junction, CO, Alecia (William) Anderson of Grimes, IA, William Krula of Rogers, Callia Krula of Fremont; 2 great-grandchildren, Mila Anderson, Atley Anderson of Grimes, IA; and special friends Stephen and Tina Halley. She was preceded in death by her parents; 2 brothers, Joseph and Manford Boggs; and 8 brothers and sisters-in-law, Frank and Luella Bogner, Oliver “Peter” Bogner, Benjamin Bogner, Carl and Margaret Weithman, Helen Ferguson and Lenora Boggs. The funeral will be 11:00 a.m. Friday at the Fremont Church of the Nazarene.  Visitation will be Thursday 3:00-8:00 with the family present from 5:00-8:00 at Dugan Funeral Chapel in Fremont.  Burial will be at Schuyler Cemetery in Schuyler.  Memorials may be made to Fremont Area Medical Center Hospice or Fremont Church of the Nazarene. Dugan Funeral Chapel is in charge of arrangements.

Twila M. Bogner, 83, of Fremont, died Monday April 25, 2011 at her residence.  She was born to Ernest and Susan (Wagner) Boggs on July 7, 1927, in Continental, OH.  She attended grade school in Continental until the 10th grade and then went... View Obituary & Service Information

The family of Twila M. Bogner created this Life Tributes page to make it easy to share your memories.

Send flowers to the Bogner family.