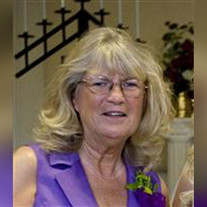 Vada Kyler, age 61, of Fremont lost her short but valiant battle with cancer on Tuesday, April 24, 2012. She died peacefully in her home with her family by/at her side. Vada was born on April 26, 1950, in Winner, South Dakota, to Lyle A. and Hazel M. (Barnett) Kyler. She grew up surrounded by her 9 brothers and sisters in Winner, where she also attended school and raised her only child, April (Kyler) Kardisco. One of Vada’s proudest moments was receiving her Bachelor’s degree in journalism from Mount Marty College in Yankton at the same time her daughter received her high school diploma. While at Mount Marty, Vada wrote numerous articles for the college’s newspaper. She also served as the paper’s editor. Vada worked many jobs throughout her life, but she spent the majority of her years as a nanny in various locations including Virginia, New York, Florida, Lincoln, and Omaha. After years on the east coast, Vada returned to the Midwest to be near her family and watch her grandchildren grow up. Vada prided herself in spoiling her grandchildren with their favorite treats, and she always had goodie bags ready to distribute at every holiday. Most recently, Vada was employed by the University of Nebraska Medical Center in the sterile processing department. Vada was always a diligent worker, and in her last days, her strongest desire was to return to work. Vada is survived by her mother, Hazel Kyler; seven siblings, Elsie (Tom) Saunders, Carol Zvorak, Eunice (Sam) Cole, Willard (Judie) Kyler, Jim (Gina) Kyler, Sharon (Don Etherington) Totten, and Nila (Dave) Lively; her daughter, April (Jim) Kardisco; four grandchildren, Alicia Kardisco, Ainslee (Tyler) Kroenke, Joseph Kardisco, and Sydnee Kardisco; two great-grandchildren, Moriah Cash and Meredyth Pilkenton, and many nieces, nephews, great-nieces, and great-nephews and other family and friends. Vada was preceded in death by her father, Lyle Kyler and her brothers, Roger and Leroy Kyler. A private celebration of life will be held this summer in Winner for family and friends. Memorials may be directed to Odyssey Hospice in Fremont.

Vada Kyler, age 61, of Fremont lost her short but valiant battle with cancer on Tuesday, April 24, 2012. She died peacefully in her home with her family by/at her side. Vada was born on April 26, 1950, in Winner, South Dakota, to Lyle A.... View Obituary & Service Information

The family of Vada E. Kyler created this Life Tributes page to make it easy to share your memories.

Send flowers to the Kyler family.